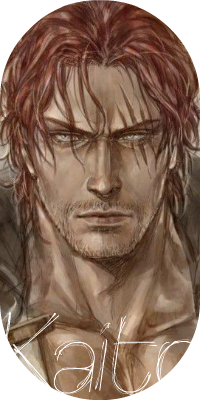 The sun peeked over the horizon, the skies already a blur of color as the shafts of light refracted through the atmosphere, painting the heavens in tones of light blue that darkened towards the West, but also a mesh of yellows, oranges, pinks and violets, the colors all melding and wavering behind a few clouds as though they were drunk guests at a wedding. It would be another stretch of time before the beam flooded a particular room, until eventually it started shining onto the eyes of a redheaded Kage, the dark and violet irises of the mismatched eyes drinking the photons that travelled so long and yet so fast from the burning star and onto the planet. The redhead squinted as he looked out the space between the cracked window; he wouldn’t usually allow himself to be this exposed, however this country was much warmer than the Lightning Country, and even then Kaito would’ve slept with a window open in some other room, so a small crack on the window could be forgiven. Not only that, his lilac eye had been enabled on and off throughout the night, a beacon that would capture everything around him. He had been here for a few weeks already, and had had the opportunity to study the habits of the people around him. Routines, sleeping patterns, even night walks and shopping trips. It was weird what being away from the home country allowed a man to do. Had anything unusual taken place, it would’ve triggered Kaito’s paranoia into action.

He had been mostly enjoying the time away as a vacation, for the most part. He would walk the streets from time to time to learn more about the culture of the Haven Country, how the people related to each other and to foreigners. He didn’t feel offended at all by the way people looked at him; he got dirtier looks in Kumogakure from people who doubted his skill set and laurels. But they seemed to be a very closely knit populace, for the most part. Yet he couldn’t afford to just walk around. Most of the time he came back to the room, he just exercised, aiming at keeping himself in top shape at all times. He would often visit the hot springs, as well as a brewery, and a house of ill reputation. Hopefully he won't catch any creepy crawler.

Sleeping had been a challenge recently. His paranoia wouldn’t allow him to just rest easy, so most of the time he would have a clone watching over him, which would fuck majorly with his sensation of having rested when he woke up and had several hours of standing around dumped back onto his brain. He aged mentally at an accelerated rate, if one were to consider it carefully. The amount of time he had his clones around only to have them collect their own thoughts and create their own memories which were then added to his own… there were no brakes on this paranoid train.

He would receive news from time to time from his dear Kumogakure. The letters, written in the coded prose of the Lightning Country, would let the Kage know of happenings of his beloved village. Few ninja had come back into active duty, according to the improved Hospital management quite a few ninja fell there, a bad sign considering Kaito wasn’t one to encourage people getting hurt for the sake of it, but one couldn’t fault them for trying. Some had also returned from leaves of absence, and one even without a leave. Interesting developments. If the letters were to be believed, an old acquaintance of Kaito had also returned to active duty, Anaphiel Hidemori. Rumor had it, Anaphiel had a family emergency which pulled him away, and it had saddened Kaito to learn of it. He wasn’t a friend of the guy by any measure, but having had worked with him on a mission in the past and not hating him was quite an accomplishment. There appeared to be a breach in security as well, but it had been taken care of.

The bags under his eyes drew darker every day. At least the sake was good. Nice and warm in the afternoon, so he could enjoy the flavor, cold and bitter when it was late and the drink cheap.

There was also the matter of his genin which had so many micro fractures along his body he nearly died on his first conflict. Kaito thought back to his friend Ichigo back in the Kumogakure. He hoped he had improved the healthcare system there… or Kaito would have a heart attack before he could die in battle. He stayed in the inn for the day. It would be an actual day off.
/exit
WC: 795 words
Claiming 272 towards A-Rank Great Fire Annihilation, unlocking it.
Claiming 213 towards A-Rank Lariat, unlocking it.

Re: Day Off [Private]