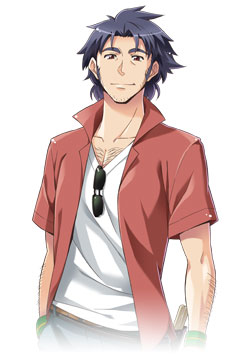 "Alright young man, if you do this right, I'll start handing you the real jobs that pay well. I'm starting to see your worth, despite your rather urban upbringings...", the old priest looks upon Katsuragi with cautious eyes. He couldn't say that the boy wasn't reliable, for he manage to complete all the petty jobs given to him without a problem. Not to mention the fact that the boy never tried anything funny with hi to get a little extra. Perhaps, just maybe, Katsuragi could do well with the family. It nice to get them when their young, for the possibilities are endless. "You'll be working under the guise of Rei Yamato, a hired guard that is supposed to guard a vendor who happens to be selling a little bit more than what the public believes he to be selling. He sells weapons stolen from major villages, and hasn't gotten permission from the family to do so. That's why you will be guarding him, and the follow him to his warehouse here he hides everything. We haven't managed to track it down, but thats why you are here. Once you find it, take him out, and secure the warehouse for the family. You got all that?"

Tuning back into the present, Katsuragi is seen standing next to the stall. His appearance was different, top match his new identity of Rei Yamato. For four long hours, he stood there, eyeing the passing citizens. Not much though, since he was in a small town. But he could see why the disguise was important. By now, they already probably know what Katsuragi's really face looks like, and if this stall owner were to go missing, it would all lead back to Katsuragi. Which could lead to a warrant, then the major villages nearby would probably get involved etc etc. One chain reaction after another; Katsuragi sighs at the tedious thoughts. As time passed, the stall was finally being shut down. Katsuragi taking note that the seller didn't sell not one thing. Perhaps there were no buyers scheduled for today. Would that mean that the seller never brought any weapons with him? This all started to become more unnecessarily complicated then it would need to be. After receiving the payment, the seller went on his way. Katsuragi acted like he was leaving, but managed to follow the carriage.

Later on, the carriage arrived at a apartment complex. There was no warehouse insight, which caused Katsuragi considerable frustration. "Man, where the fuck is the shit", Katsuragi continued looking around but found nothing. As the seller went up tiny his apartment, Katsurai went towards the carriage, keeping a low profile. Once there, he stared rummaging through the items but only found scrolls.

"Hold the fuck on...", taking another look at the scrolls, he found strange markings. He wasn't too familiar with fuinjutsu, but he knew these scrolls had to have something. Unable to unseal them, he grabs the five scrolls that had the markings on them and left the carriage.

Later, sitting down with the priest, the priest looks at the scrolls. "We were wondering how he did it, we didn't know our guest used fuinjutsu. OH well, whether this be it or not, he can't make a living selling blank scrolls to citizens who don't practice ninjutsu. Here's the money. We'll keep eyes on him, well done"