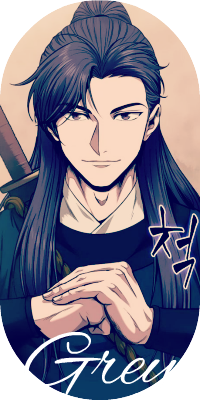 Age: 19
Birthday: January 1st
Gender: Male
Height: 5'11
Weight: 172 lbs
Health: 100
Appearance: A relatively handsome young man with a pale face, long black hair and matching black eyes. With his height he doesn't exactly tower over people but can still be considered taller than most. Years of practicing both the blade as the renowned Gentle Fist his clan is so famous for allowed Grey to develop quite the muscular build. His body is covered in countless little scars as a result of harsh training over the years. He doesn't have any piercings nor tattoos but it's certainly something that has been on his mind for the future.

He usually wears dark black traditional clothing but those colors can vary. Instead of jewelry or other flashy accessories Grey usually wears bandages around both his wrists, used for utility as well as a fashion choice. Occasionally he also puts the symbol of his clan somewhere on his clothes but always out of sight.

Personality:
Respectful: from a young age he was taught not to speak out of turn, mind his language and always use a polite manner of speech when talking to someone regardless of them being younger or older than him. Although it isn't that out of the ordinary for a Hyuuga to tend to have small forms of arrogance, Grey will never see himself as superior to others. Those who have his respect will also find he's loyal and kind to those he considers his friends.

Strong-willed: Having faced and overcome many hardships through his younger years left him with a strong determination, destined to prove his worth and fight against all odds. It allows him to move on quickly when experiencing a setback and enables him quick decision making. One could say Grey is quite a level headed person who remains calm at all times.

Amical: Friendly and able to make friends he also possesses a great sense of humor, great timing in knowing when to use a pun or joke to break conversation. People are often surprised when they catch Grey cracking a joke since he usually remains on the background taking on the role of "silent guy" instead of "class clown".

History: Grey was born in Konohagakure no Sato, a family of five with two siblings both older than him. Growing up as the youngest of the boys wasn't exactly how one would expect. Whereas other families usually spoils the younger son it was different for the Hyuuga. First borns being treated better with the younger siblings expected to be protectors of the elder, a vassal in some families. Of course his father made sure the outside world wouldn't become aware whereas his mother, a regular woman not possessing the Hyuuga bloodline was ostracized herself as well, unable to help her son with his predicament.

Due to being seen as impure due to his lineage and order of birth it was a hard time growing up for Grey. Curfews, only being allowed to go on missions, train at designated times, forced to be at the beck and call of his older siblings,.. To say it wasn't easy for him would be quite the understatement. He spent most of his days doing as he was told, training on his own and finally entering the Academy where he tried his hardest in order to make his mother proud. Grey was far from the model student, his results were good but not great however that didn't stop him to keep pushing because he knew his time would eventually come.

The day he graduated from the Academy was also the day he made up his mind. By then the boy turned twelve years old and the situation at home didn't improve in the slightest. He was still being treated the same, perhaps even worse when his family found out he practiced the sword instead of the Gentle Fist techniques their clan was so famous for. In truth, he loved both. But of course they took this as an opportunity to exclude him even further. Having had enough of it Grey decided it was time for him and his mother to leave both the clan and the village before something worse would evidentally happen. And the future proved them right.

Moving to a port town in the South-Eastern border of the Land of Fire he spent his years working on ships while his mother ran a little flower shop. It was there that the now 19 year old Hyuuga met two other men that ended up becoming his friends. Honing and perfecting his skills with the sword as well as keeping up with the famous Hyuuga clan techniques Grey made sure not to sit still and keep himself busy all the while keeping watch over his mother. It was going to be interesting to see what the future would bring for both of them and his two new companions.