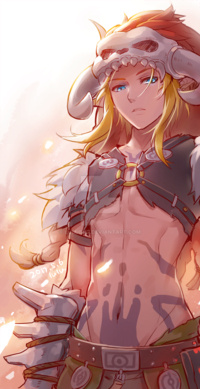 Age: 21
Birthday:  Jan 4th
Gender: Male
Height: 6'2
Weight: 150
Health: 100
Appearance: Sugimoto has long blonde hair that he keeps swept back under the the wolf skull he wears as a headdress. His eyes are a light blue that almost seem to glow and under each eye he has the red Inuzuka clan tattoo. His skin is tan and his body toned. He wears a short hide vest that shows most of his torse and the war paint that adorn his lower stomach. The vest has tuffs of fur on both shoulders that offer some defense. He also wears hide shorts and fabric held together by a belt that cover his upper thighs. His shins and ankles are covered by thick fur boots that expose only his toes and heels for easier mobility.
Saito, Sugimoto's canine companion, is a wolf like dog with thick redish hair that stands at four feet tall on all fours. He has a scar over his left eye and is also missing the tip of his left ear.


Personality: Sugimoto's personality is more along the lines of a wild animal than that of a man's. He grunts and growls more than he actually speaks so he's rather quiet. He prefers to keep to himself and most interactions he has with others are aggressive. He's very territorial over his part of the forest and doesn't take kindly to people trespassing, whether they realize they're doing it or not. Sugimoto lives off the thrill of the hunt and sees everything as prey. If he deems the prey worthy after a successful hunt he often takes a trophy. He keeps a collection of his greatest trophies stowed away in the forest. These tropies would consist of antlers, claws, and headbands alike.


History: Sugimoto was born into the Inuzuka clan just like any other Inuzuka child. There was nothing special about him that set him apart from anyone else. He had loving parents and played with the other children of the clan often. He trained and wanted to be a strong ninja to make his family and clan proud. His father took him into the forest frequently, teaching him how to live off the land at a very young age. Then one day something changed inside of Sugimoto.
On this day Sugimoto's father took him on a hunt as usual. The only difference was that Sugimoto's father decided it was was time for Sugimoto to be the one to kill the deer. Sugimoto was excited and almost shaking with excitement as they perched in a tree waiting. He had gone on many hunts with his father but had never been the one to down the deer himself. He had only helped clean the deer and transport what they collected back to the village up to this point. After waiting only a little while a doe came strolling along the path under the tree. Sugimoto squeezed his kunai tightly and waited for the deer to get closer. He prepared to do what he had watched his father do so many times before. With a gentle nod from his father they both dropped from the branch they were resting upon landing on the deer. The sudden unexpected weight caused the deer to buckle and Sugimoto's father pinned it to the ground. Before it was even able to realize what was going on Sugimoto sunk the kunai into its side behind its shoulder blade just as he had seen his father do in the past to quickly dispatch the deer. As the kunai slid into the deer, Sugimoto locked eyes with it and watched its emotions play in its eyes. He could see the fear and the moment it felt the kunai puncture its lungs. Then as it settled he watched the life leave it's eyes. Sugimoto enjoyed every moment of it. His father noticed a small smile play across his young child's face and realized right then that he might have made a mistake.
After that day Sugimoto's personality slowly began to change. He began to keep to himself more and grew quiet. Though people noticed the changes they thought nothing of it for he had done nothing wrong. Sugimoto's father was more concerned than anyone else but he hoped it was just a phase that would come to pass.
The day finally came when the children came of age to receive their very own canine companions. Each child was handed a puppy that they bonded with instantaneously. Each puppy had its own personality and was unique in its own way. Sugimoto received a red male wolf like puppy that seemed to be more aggressive than the others. It wriggled around in the adult's hands growling quietly and trying to bite their fingers. The adult quickly handed the puppy to young Sugimoto in order to spare their own hands from the aggravated little beast. The puppy continued to wiggle for a second until its eyes met Sugimoto's. It calmed and stared into his eyes. They almost seemed to enter a kind of trance as they imprinted on one another. Sugimoto's father watched happy but also concerned. To this day no one in the clan knows whether it was the aggressive puppy that changed the boy or the strange boy that changed the puppy. Maybe neither of them changed for the other and it was just a perfect match. Sugimoto decided to name the rowdy pup Saito.
As Sugimoto grew with his companion they became more distant from the other members of the clan. They would train and go on hunts alone rather than interact with others. Sugimoto developed an obsession with collecting tropies from his successful hunts. His room was full of antlers and claws hanging from his walls. It seemed like each day he was bringing something else in to proudly hang on his walls. His father noticed but assumed it was just Sugimoto's way of paying respect to the game he had caught and killed or at least he hoped that was what it was.
Sugimoto was now in his late teen years and the kids he had grown up with began to treat him differently. The occasional scuffle would break out between him and another male of his age. It was never too serious and would always be broken up by one of the adults before anyone got hurt. The fights made Sugimoto feel pressured and threatened causing him to become more aggressive towards others. Finally the day came when tragedy struck. Sugimoto was out on a hunt with Saito when they ran into the same teen that was always picking on him. Like Sugimoto the other teen also had his canine with him. By this time the dogs had almost reached the full size they would grow to. After a brief argument a fight broke out between the two boys and the canines joined in. The forest echoed with a series of aggressive barks, growls, and the occasional yelp. Then all fell silent. Sugimoto bested his rival and left him lying bloody and beaten on the ground but not dead. The same can not be said about the teens canine companion. Saito had crushed its windpipe and it laid on the ground lifeless as he licked his own wounds. Sugimoto decided it was time to separate from his clan. He feared what might happen to him or his companion if he returned and they found out what happened. He then claimed the head of the fallen canine as a trophy and wears it as a headdress to this day. After doing so him and his companion disappeared into the forest never to be seen by the clan again. 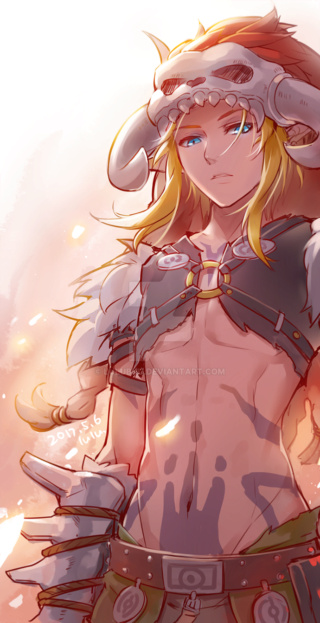