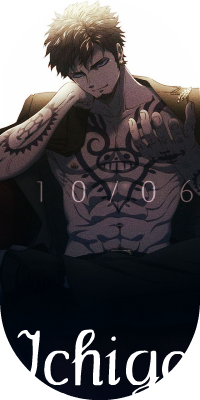 In his current position, still directly 5m behind Satoru, the Drunk noticed how the old man realized the miscalculation of his jump, aware action needed to be taken in order to avoid getting caught in the swamp that started forming below him while he himself was still up in the air. It was that same realization that led to the man's next set of movements, not giving up yet as he decided to give the Kumogakure delegation at least somewhat of a fight. "Teleportation?", the Deputy thought to himself, immediately activating and empowering his body with nature chakra as his irises turned golden and three horns started growing, all remaining hidden underneath the mask.

With a burst of light the enemy vanished before reappearing on the ground 10 meters from Satoru's position and 15m from Ichigo's. Now finding himself within the aforementioned distance the old man would create a small, black sphere completely visible to the naked eye, Ichigo's Byakugan not needed to spot said dot. As the sphere expanded their opponent would begin to backpedal two meters backwards, putting him 12m away from Satoru and 17m from the Deputy. Trusting the Storm Operative to handle the potential threat approaching them, Ichigo decided to try and take care of the assassin instead.

Forming the necessary hand seals, Tiger - Boar - Dog - Dragon - Rat to be precise, immediately followed by another set of Boar - Tiger - Ox - Dragon - Monkey - Bird, Ichigo selected a center point well within range. The moment Ifour arrived at his new position the Drunk had activated a technique of his own, effectively creating a swamp 4m directly behind the opponent. From that specific point, 21m in front of the Drunk and 16m of the Jugo, the swamp quickly expanded and spread out to a total 25m radius due to the Deputy's potent chakra. With the Storm Operative's destructive beam in front of the old man while the swamp came in from behind in an attempt to drag him in, things weren't looking all too well for the assassin. In any case, Ichigo remained cautious and ready to react if need be.

Survived 2021
You've completed the Christmas Event of 2021 and qualified for the last reward, by partisan you are awarded this fancy badge!
Ryo : 0

The Swamp expanded from the foes rear; the canon advanced upon the males location. Before long, because of his inability to react his feet were caught by the Swamp, his body descending into the ground at half the speed of the Swamp. Before his body could even go halfway into the ground, the chakra canon would come upon the males body, the sudden shift in directional polarity due to the excessive stress placed on his suspended body would effectively split the males body into two upon contact. The top half carried the full distance of 100 meters, the bottom half, suspended in the ground because of the now destroyed Swamp of the Underworld. The males intestines were effectively pulled apart from the top half of his body. The sight was disgusting to say the least.

As the canon faded and Satoru confirmed the death of the foe, he would come to collect the one legacy Kunai that he left on the ground before turning to the Deputy. “Ready when you are.” Once the Deputy signalled that he was ready, Satoru would perform the hand seals for the Novachrono Teleportation technique, resting one hand on his compatriot, teleporting the duo to the gate of Kumogakure.
[Exit]

OOC – GGs – Sorry mate, we have to head back to the village. Hope you understand. 4 days have elapsed. I appreciate that you're busy but need to try get 1 more hunter in before the end of the year.

I think AP costs are unnecessary as threads ended but can add back in should the need arise.

Will do claims later but in line with https://naruto-role-play-rpg.forumotion.com/t50323-protection-assignment#381415 will claim S rank mission instance for protection assignment.

No reaction. With the combined efforts of the Deputy and Storm Operative there came an end to both the assassination attempt as well as the old man's life. Ichigo's Swamp expanded from the enemy's rear while Satoru's beam advanced upon his location, the earthen underworld slowly dragging him in as the destructive canon removed his upper body from his lower side while the rogue's movements were limited due to his feet being caught in the Drunk's technique. The assassin's inability and incapacity leading to his death, unable to avoid Kumogakure's attack. As the Jugo's jutsu faded the blacksmith's son deactivated his as well, the swamp coming to a halt a couple of meters away from the duo's location.

Ichigo watched as Satoru confirmed the death of their opponent, picking up the kunai he threw moments ago before both men returned to Kumogakure through the means of teleportation. With his Byakugan still activated the Deputy agreed, longing to finally go back home after the recent events taking place in the Land of Tea.

Ifour failed to react, his negligence, costing him his life.

Survived 2021
You've completed the Christmas Event of 2021 and qualified for the last reward, by partisan you are awarded this fancy badge!
Ryo : 89300

Approved. Death to Hunter and Mission failure for Ifour

Survived 2021
You've completed the Christmas Event of 2021 and qualified for the last reward, by partisan you are awarded this fancy badge!
Ryo : 0