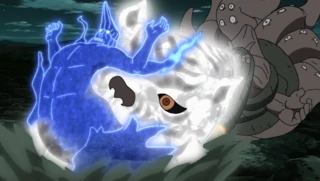 Handseals: Unique Tiger Seal
Duration: 1 Post/Max distance traveled
Cooldown: 3/4 Posts
Range: 50/70 Meters
Power: 60/Strength
Speed: 60/Strength
Health: N/A
Stat Boosts: -
What it does: The user places a palm facing forward in front of their face with one hand and then taps it with his other hand, formed into a fist, which is the catalyst for creating a massive amount of air pressure. Next, the user forms a unique hand gesture resembling a tiger they must maintain. This technique launches the target's body with air pressure in the shape of one by leaving a gigantic twenty meter long, fifteen meter in width and twenty meter tall, tiger-shaped impression into the initially built-up air pressure with the hand gesture. The air pressure will continue travelling along its trajectory, being focused on a single point the user chooses as long as they maintain the unique hand gesture. This technique is a two-part attack. Should an obstacle be within the tiger's trajectory, it will clamp its powerful jaws onto it and attempt to carry its target with it, causing it to deal a flat 50/70 power in damage.

If the target has more strength than the power of this technique, they may escape the jaws unscathed. The second part of the technique releases the hand gesture, expanding the built-up air pressure at jutsu speed into a large sonic boom in a twenty meter radius, dealing jutsu damage. If the hand gesture is not released before the tiger reaches the max range, then upon doing so, the tiger dissipates, putting the technique on cooldown. This technique requires a massive amount of strength and cannot be utilized without being in a state of enhancement. Should the user of this technique have 100 or more base strength, they may be able to utilize this technique without the use of an enhancement.