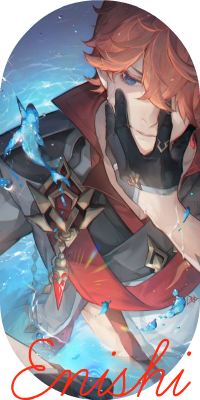 Well then, it seemed that the Water Wall Technique was indeed a success. Ghost was able to successfully retrieve the Wind Bell as a seal of Wind appeared on his hands, signifying that he was condemned to only have that bell. As the Water Wall began its formation, the understudy would take the opportunity to grab the Water Bell from the now warm pond due to Ghost utilizing the Fireball jutsu in order to heat it up, only needing to outstretch his right hand to quickly get it. Enishi view that a Water seal would be on his hands, signifying that that was the only bell he could attain. All in all, it was a neat trick made by the proctor in order to force the two to cooperate. As Enishi grabbed the Water Bell, he would form four handseals through the singular use of his left hand to unseal one of his Nature Energy Inhibitor Pills that was sealed in his Ninja Tool Sealing Bands on his right forearm. He sensed that he didn't have much time before going berserk, so he needed the pill to stop any more gathering of Nature Energy. The Nature Energy Inhibitor Pill would instantly remove itself from his right forearm sealing band, so the understudy only had to grab it with his left hand and swallow it immediately. All of the aforementioned actions would have occurred in only a few moments, mind you.

As Enishi finished taking off the bell and swallowing his pill, his eyes would look up to see Arashi in the course of jumping and the clone getting ready to throw a Kunai laced with an Explosion Tag. The understudy had to think quickly, so he briefly told Ghost what he was going to do, "Flow, I'm going to terraform the ground so we can get off the mountain quickly." Simultaneously as Enishi said those words, he formed three handseals at maximum speed with his left hand, still holding the bell with his right one. And immediately, the mountain would shake as if an earthquake was occurring. From Enishi and Ghost's position and backward -signifying their side of the mountain and the side Arashi and his clone was not on- the Mountain summit would split in a perfect half. The side of the mountain that the Genin were on would rapidly descend until the two were on ground level, meaning that the 15-meter radius hemispherical platform they were on would merge with the ground once the two had descended 40 meters (ground level), effectively cutting the size of the Mountain summit in a perfect half. Once the two were on the ground, finishing moving the earth downwards by splitting the mountain in half and moving their side of the mountain downwards to merge with the earth.

As the two were on ground level, evading themselves from any of Arashi's future actions as well as the Hidden Mist, Enishi would deactivate his Water Wall, seeing as there was no use for it now. The beginning of the Tekiatsu River was in front of them, about 20 meters away but the two wouldn't see Arashi who was right in the middle of it just yet. But, it would be idiotic to not take cover as they were running back. "The training grounds shouldn't be that far away; I'd estimate that it's about 60 meters from our current location. I suggest that we - instead of using Surface Walking to walk through the lake- should actually use the trees to obscure our location so the proctor can't find us." He asked Ghost, awaiting his answer.

As he picked up the wind scroll. A symbol would come on his hand. It was a side effect of touching the scroll. Ghost would be shocked by this. But all the more excited. Looking on he would give a smile as he looked up to see his teammate grab his scroll the water version to his wind. With the water wall in place. Ghost would watch as the sensei tried his next move. Just as he was about to attack. The very ground would start moving after he heard his teammate say something "TRANSFORMING, what in the world". He would look around with his eyes to see that his teammate would be the one. Casting such a justu and before he knew it. He was sliding down the mountain. This surely indeed shocked Flow. As he did not know this guy could do this. Looking on he would keep an eye out. As they were sliding down the mountain.

As they made it to the bottom. Flow would be in pure shock at what just happen. As he dust himself off. He would look on at the river. Seeing as they had a chance. To leave as the sensei would be on the other side of the river and still up the mountain. This would give them even more time to make it to the training ground. Flow would look back to his teammate as he responded to him. " yeah we could I wish my eyes could see more but it can not. It's more of a close range type of deal and they are the Sharingan. I like to apologize from earlier about hiding them. Even though we needed to work together from the beginning. I was a bit scared to show these too you. But you have earn my trust since the mountain top. Now let's go while we still can. Allow me to lead the way as I can move extremely fast my relaxes are at it's peak and I can make sure nothing catch us off her privies."

Just as he said that Flow would dash off at max speed. One of his strong points. Rushing through the trees. He would be in head to lead the way. So nothing can catch them off guard. If all goes well with there amazing defense up. Flow would have made it to the training ground. Hopefully his teammate was right next to him.

It was another surprise he hadn't expected.  Seeing a slab of the mountain descend down... ahead of an avalanche... was impressive.  Arashi dispersed himself to make it easier to zoom down the mountain for his next test.  This was the big one.  The jounin looked to the sky to get a sense of the time.  Their allotted period to pass the test was almost out.  He had watched these genin; this generation seemed more interested in fighting.  He expected that, and therefore planned a test that not only wasn't a direct match, but that would have fighting as a way of losing.  He didn't tell the genin that, of course, but he gave his mission and he expected it to be followed.

So as he stood on the surface of the lake, he closed his eyes, feeling the chakra around him.  If they stepped into the lake he would know.  The question is; would they break to fight him now that he was offering it, or would they not fall for the bait.  Interestingly enough, as he waited and heard the two approaching, there was a snap of a twig.  He smiled; they decided not to take the route through the lake; they were going straight for the training grounds.    With a sigh, he turned white and dispersed as his water clone was released.

The real Arashi was at the training grounds, but in his cloud form.  As the two reached the end of the course, he moved between the two genin and reformed behind them, opting to let the test conclude.  "Alright, time." he said, alerting them that it was over, and he walked to face them.  "I don't even have to see if you grabbed the right ones; that was a clever use." he said, releasing the seals to reveal the bells now in their hands. The seals on their skin would also fade and vanish   "It was a bit of a slow start, but I'd say you barely made it back in time.  I expected a little more in the way of avoiding traps, but you found a way to make my entire mountain descent moot."

Arashi took back the bells and put them away.  "Now the question is... did you pass?  That will take me some time, so expect to hear from us later.  But at the very least, neither of you two were disqualified.  We shall see how the other teams fared and discuss who will be going on.  You two are dismissed." he said, standing there to watch them leave.  Looks like he had some work to do."

Enishi would travel alongside Ghost to arrive at the training grounds in record time, to which Arashi would reappear before them in a burst of cloud energy. The Jounin proctor would congratulate the two on effectively retrieving both bells and completing the task, however, that did not mean that they were guaranteed to pass. The Chuunin Exams were a competitive test, but judging at how the two were able to complete the bell test...Enishi deep down felt like he was going to the third round. After all, he promised Zeo that they would see each other in the third round, so he could not fail here. Nevertheless, the other proctors of the Chuunin Exams needed to finish evaluating the other teams to see which teams did the best and which did the worst. So for right now, all the understudy could do was wait. He wondered whether this was how Suguru felt when he partook in the Chuunin Exams many years back.

Before Enishi would leave the premises upon being dismissed by Arashi, he felt that it was necessary to complement Ghost on a job well done. Despite his inherent bias against the outside world, Enishi could not deny that Flow was a great teammate...now only the final round would reveal his aptitude as a shinobi. "Nice work, Flow. I believe that we preserved ourselves a ticket to the final round. I hope to see you there, and if we end up matching against each other...then all I will say is good luck."