Name: Bubble Prison
Element: Water
Rank: B / A
Specialty: Ninjutsu
Particular Jutsu Type: n/a
Backstory: The bubble line of Suiton is unpredictable and tricky to handle. No one can imagine these whimsical bubbles being of danger or even to be as strong to be so flimsy. However, when no one thinks it-- these flimsy bubbles can become things even to hold the enemies' toughest. Much like "Bubble Dome," using Chakra can make them not only durable but also restrictive to people's movements and actions. 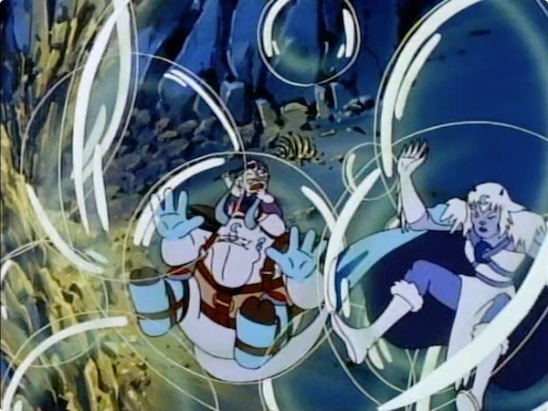 Appearance: The bubbles used from other techniques can float to a target location. However, when triggered, the bubble will grow and suck up the intended target inside, capturing him like a snowglobe containing an object. The jutsu can also use smaller bubbles to isolate parts of limbs, normally hands, to stop hand signs.
Handseals: Bird > Snake > Hare > Tiger > Rat.
Duration: Explain Below
Cooldown: Cooldown 4.
Range: 20 / 30 Meters
Power:
Speed: 30 / 60
Health:  30 / 60
Stat Boosts: n/a
What it does: The caster blows out a bubble/bubbles or uses pre-existing ones from other techniques. When hand signs are triggered, those bubbles will drift to the intended target. Once it reaches it, the bubble will expand to take effect.

This Jutsu has one of two effects. One creates a massive large bubble akin to "Water Prison," reaching 2.5 meters in size, capable of catching a target. The bubble is highly durable and resilient, enforced by the caster's chakra while open space inside. Those captured inside a bubble cannot escape unless their strength exceeds the health of this technique. To keep the target trapped, the user must maintain a 'confrontation' hand sign and cannot cast any other new jutsu while in effect.  Targets trapped in this prison for longer than 3 posts fall unconscious due to lack of oxygen inside the bubble. While focused on the bubble jutsu, the caster can move the bubble within their influence range to move the target if they wish.

Another version of this jutsu is smaller but just as tricky. Instead of one large bubble, the caster can command two regular size bubbles no bigger than .5 meters big to float to a target-- and target their hands. Once entrapped, the target cannot use their hands to form hand-signs for jutsu, either using two hands or one hand via the "One-Handed Seals" skill unless the enemy chakra is higher than the user. Otherwise, the enemy chakra can burst the bubbles apart. This also prevents the use of 'weapons' as the hands cannot grasp or forces items free from the user's grasp-- if their strength is lower than jutsu's health. Restraint of hands may last maximum of 3 posts before it expires and enters cooldown.

Only one version or another can be used upon activation and cannot be switched mid-duration. Both versions can only target one person at a time. To maintain the prison, the user cannot cast any other techniques at that time. For this reason, water clones can be used in combination with 'Bubble Prisons" either by having the clone attack other targets. Simultaneously, the user maintains the prison or clones themselves from the prison, leaving the user free to act.

Appreciate the edits made via discord discussion.