The First Mission: Don't Break Them! 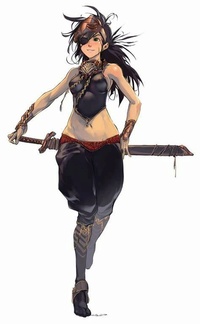 The First Mission: Don't Break Them!


Task: An old farmer of hoshigakure wants to deliver some crate of eggs to a food store in the village. You have been tasked the mission to help him deliver the crates of eggs to the store. You fail the mission if any of eggs gets broken. Deliver the eggs safely to the food store.


Blarg! Blarg! Blarg! A loud and annoyingly abrupt alarm sound filled the mostly empty room where Imane had laid for sleep. Imane raised her head in a quick startle, breaking her slumber. With a soft rub at her eyes and a scratch of the head, she rose up from her mattress and came over the side to a ray of sunshine through her window. She stood halt for a yawn before getting fully out of bed and heading to her wardrobe closet to equip her everyday attire. Afterward, she gripped her new Hoshigakure headband with pride, then separated the two ends and tied them around her neck, allowing it to loosely hang down. With all her gear in place, she got ready for her task of the day. She picked up a delivery request yesterday, ready to begin the first baby step of her kunoichi journey. “So, a farmer needs help bringing a couple crates of eggs into town.” Imane reminded herself before grabbing her sword that laid at the room door within a sheathe and tied the sheathe to her lower back. All preparations are out the way. Exiting her room, she made her way through her living room and kitchen to the main door that led outside, passing her brother’s room. “Alright, I’m off!” Leaving the residence, she started her stroll toward a local farmer’s house on the other side of the village.

Imane strut proudly through her neighborhood, feeling honored to become a fighter and defender for the village that provided a safe home. Her step was quick but not so much that her movements weren’t smooth, her motion was graceful in nature. She noticed some sly looks of the villagers nearby and in passing. Some had disdain in their eyes, others discomfort. Caught in the pride of her first mission, she had just shrugged it off as her hair being messed up or maybe it’s her attire, she doesn't exactly blend perfectly in with anyone. Her venture to the farmer’s house continued with the common stare visible to hear time and time again. Finding her way to a large plot with a modest home and plenty of room for enclosed pastures and dens of animals, she knew she had made it to the right place. Imane could see some of the baby chicken and some pigs, cows, and even horses. ‘Well, I hope those aren’t on the menu.’ She thought to herself with a giggle, horses were strong companions in her eyes. She came to the front gate of the lot and could see individuals feeding animals and a small crop yield being worked by an older-aged woman who seemed hard at work and wiping sweat of her brows. With one last touch to the crops, she turned to see Imane at the gate. This farmer didn’t seem to be bothered by Imane like the other villagers appeared to be and that came as a small relief. “Hello there, are you the new foot soldier that accepted my request?” Imane was greeted by a weathered voice which assumed the woman’s tenure in the world.

“Yes ma’am, that’s me. My name’s Imane and I wanted to make sure your delivery was as smooth as possible. Please entrust me with your business.” Imane gave a courtesy bow of respect for the elder. “Yes, yes, there’s no need to be so formal, come along child.” Then she opened the front gate for the kunoichi, quickly being followed in suit as they walked over to a food shed in the back of the land. Within it was one crate of eggs that seemed to stack two layers of eggs with a sheet in between them. “This is your delivery for the job. This needs to get across to my partner’s shop located in the City Square Your payment will be ready for you.”

Imane gave a head nod. “Should I note anything special?”

“They're eggs.” The farmer bluntly responded.

“Y-yes?” Imane stammered. The woman expressed a sigh and picked up the crate, putting it to the kunoichi’s hands softly, forcing her to take it. The crate held some heft Imane’s hands but it wasn’t anything she couldn’t handle. “Don’t break them.” The farmer reinforced.

“Understood.” Imane finished with an awkward laugh and bowed to the woman once more before turning to leave before her she stopped for the farmer began to speak. “Keep your head on your shoulders ninja. The people here aren’t fond of y’all. Learn to get over the isolating glares.” She said before gesturing at the hand for the young fresh blood to leave as she went to organizing some stuff in the shed. Imane left the farmer’s house, taking herself an Eastward direction through the village. The crate rested secure in her hands and the walk was mind numbing for her. She began to day dream a little of what her path may be like or what could be in store for her future. In middle of being lost in thought, she bumped into a man’s shoulder with her own. “Hey, watch it ninja!” Ninja was associated with a piercing tone. The ordeal snapped Imane out of her dream state and her arms fumbled. Luckily, she still had a pretty good initial grip, quickly getting hold of the crate. “I’m so sorry!” She responded as he walked off. Quickly and cautiously, she laid the eggs on the ground and went to inspect every last one. “That one is okay. What about this one, or this one?” She checked each one and everything was okay both under and over the blanket. Being satisfied, she rose and was about to pick up the crate when she notices little spot on the egg that looked void. A gasp left her mouth in dread. “Oh no.” She picked it up and looked closer. It didn’t look bad, were her eyes playing tricks on her? She rubbed her finger over the spot and what was there vanished, leaving a clean surface, she held the egg in the light to confirm. A sigh of relief came and she smiled. “It was only dirt.” She set the egg back down and picked up the crate. There were people around to notice but not a word was said. Quickly everyone went back to what they were doing beforehand. Imane held the crate close and continued her walk, remembering to remain aware as even one bad egg calls for failure.

The walk seemed a lot shorter from the farmer’s house to the shop than it was to start at her home. Before knowing it, she reached her destination, setting the eggs down in front of her so she can take a breather. Several soft huffs and a stretch later, Imane felt ready to finish her delivery. With a satisfied smile, she picked up her crate once more and entered the store with a push of the front door using her shoulder, immediately greeted by a male shopkeeper. “Hello! Oh, you have the eggs! You can put them just over there.” The shopkeeper pointed to a corner in the store before reaching into a shelf behind him that held an envelope.

“Okay!” Imane followed the order and set the crates down in a barren corner. With one final check above and below the blanket, each egg looked in shape and she stood up with a thumbs up gesture and a smile. “All the eggs are there.” The shopkeeper chuckled and approached with the envelope in hand, extending it to Imane. “So eager. You really are new. Word gets around fast here, we’re pretty tight knit. Here’s your pay, no need to check it, it’s all there. Don’t spend it all in one place.” Imane nodded and accepted it, bowing in thanks. “Thank you!” She responded before they disengaged and she left the store.

Re: The First Mission: Don't Break Them!