Blast of the Halbert

Blast of the Halbert

Name: Blast of the Halbert
Element: Explosion Release
Rank: A/S-rank
Specialty: Ninjutsu/Space-Time (optional)
Special Jutsu Type: -
Backstory:  Salvaged from the underutilized Explosion Release scroll buried in the archives, this particular jutsu was made available to shinobi, who possessed the Advanced Element of Explosion Release. As a matter of fact, this is the same technique that members of Iwagakure's Explosion corps used many centuries ago. Alright, perhaps not. However, if such a claim was to be made while you are about to blast someone to pieces with this, it's doubtful they’d disagree with you.


Appearance: A halbert of dense explosive chakra from 1 to 10 meters in length and 25 cm wide. 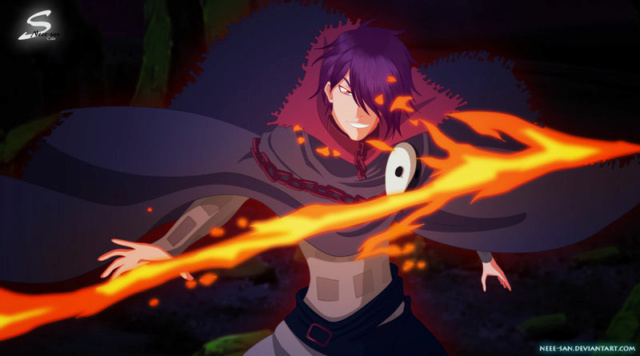 Handseals:
A-rank: Dragon - Hare - Ox - Ram - Monkey -Horse
S-rank: Dragon - Hare - Ox - Ram - Monkey - Horse- Tiger
Duration: explained below.
Cooldown: 2 posts | 3 posts
Range: 50/70
Power: 60/Stat
Speed: 60/Stat
Health:
Stat Boosts: -
What it does: The user creates a small rift of space and time up to 5 meters directly above their heads. This point cannot be within 1 meter of another character. From there, they release chakra in the form of a spear that can be fired in the direction of their choosing.

The spear can deal damage equal to jutsu power on its entire length and can be detonated with a mental command. In that case, the spear will halt in place, followed by an up to 25/35-meter radius spherical explosion. It grows at jutsu speed and will disappear once it expands to desired dimensions unless the user chooses to maintain it with an upkeep cost. The maximum duration they can maintain it for is 3 posts, and for every post held, an extra will be added on the cooldown.

If the spear exits jutsu range without being detonated, it will only fizzle out harmlessly. The spear can stay on the field for one [1] post before hitting the maximum range. The user is immune to this jutsu and its effects.

If the user has space-time as a specialty in addition to ninjutsu, they have the option to scale it with chakra instead of vigor. This is decided upon initial activation, and it may not be changed later. The user must catalog this on their stat page, next to the jutsu.