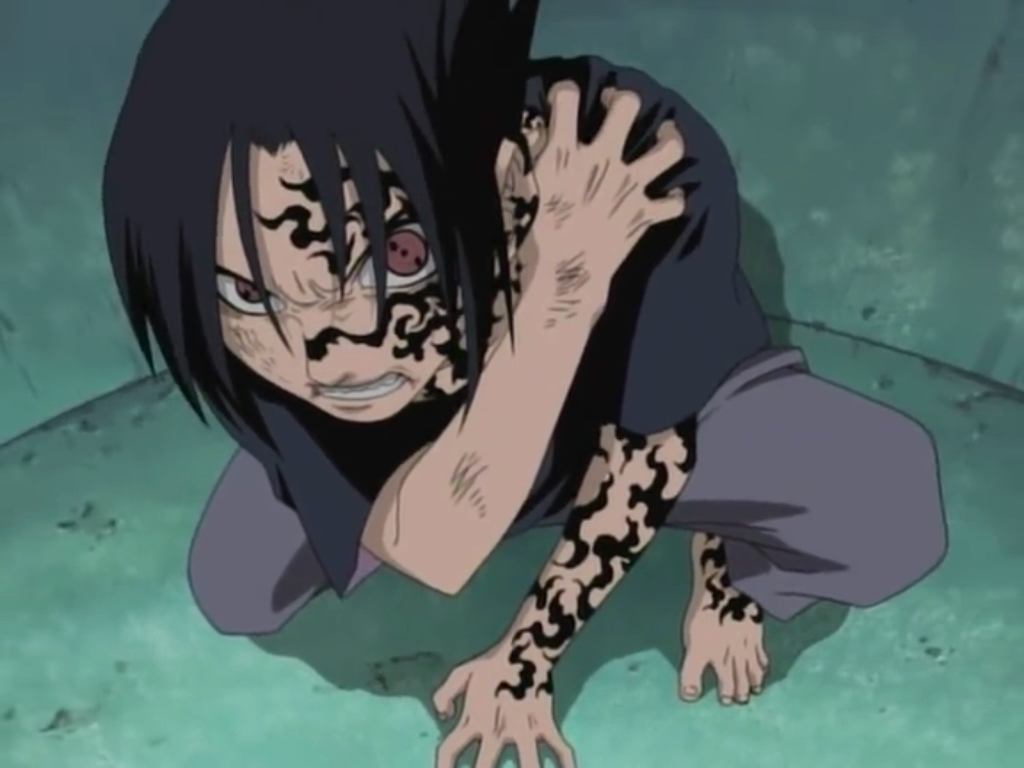 In the second stage the seal spreads across the user's entire body, forcefully inducing a metamorphosis similar in nature to a Jugo clan transformation. Just like in the first stage, it glows like fire when spreading over the body. In this form, the user's sclera turn black, their irises turn yellow (unless they're using a dojutsu), and their skin turns into a dark shade of gray, brown, or red. The user's hair might change, usually becoming more wild and taking on a different color. Other altered features of the user's body specific to their seal is guaranteed in this form. 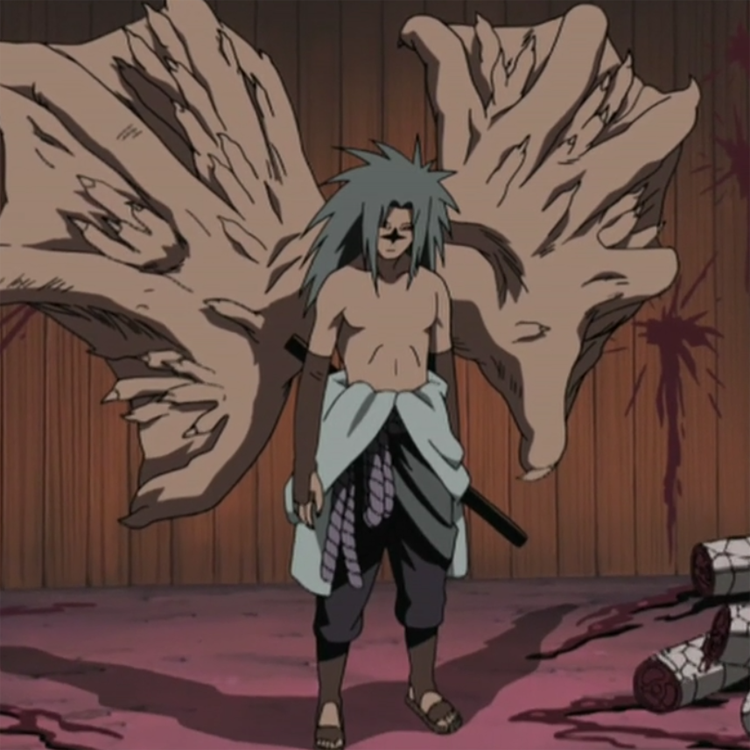 While it isn't technically its own transformation, a user skilled in utilizing their curse mark can choose apply the seal to specific parts of their bodies. While not possessing as much power as fully activating the 2nd stage, it does allow the user to activate some of its abilities without all of the inherent risks. In this state, certain parts of the users body begin to resemble that of the 2nd stage of their curse mark. Sometimes black markings resembling the first stage of the curse mark may appear, though this is purely an aesthetic choice made by the user. 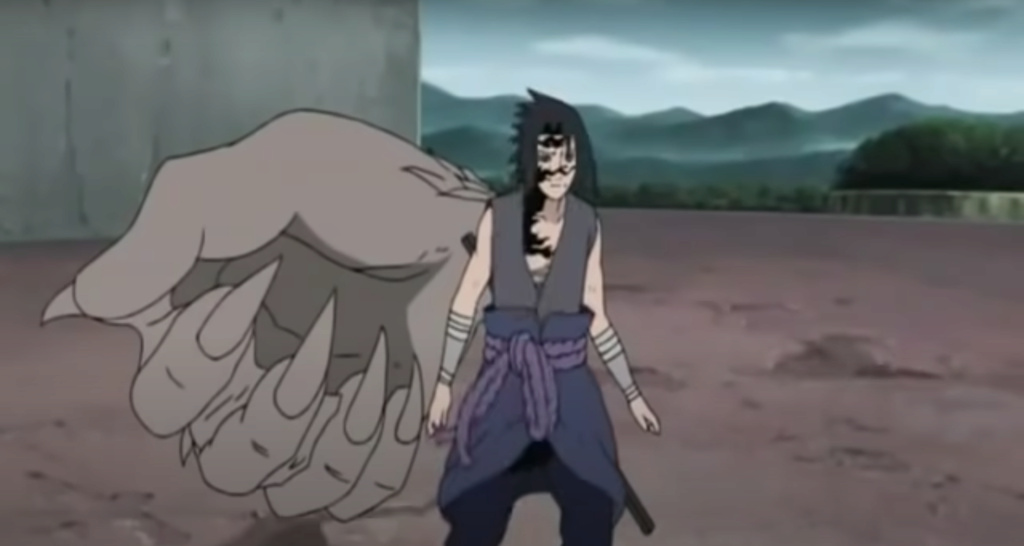 
1st Stage: +50 to two stats of the user's choosing. (Once chosen, these bonuses cannot be rechosen)

2nd Stage: +80 to two stats of the user's choosing. (These are the same stats that you picked in the first stage. These bonuses do not stack with the previous stage.)

Partial Transformation: +60 to two stats of the user's choosing (These are the same stats the you picked in the first stage. It does not stack with other curse mark bonuses.)

Upon activating a stage of the curse mark, the user gains 100 AP if it's their first time activating it in a topic (cannot go over maximum user AP). Additionally, a user can choose to change stages once per post at a cost of 40 AP. The user still gains access to the AP bonus that would result from transforming into that stage if it is their first time activating that stage in a topic. Furthermore, if they activate all stages in order of power, they can extend the duration of the transformation by 1 post, to a maximum of five posts. The order of stages goes from the 1st Stage, to Partial Transformation, to 2nd Stage.

What's dangerous about the curse mark, is that the user will suffer from severe strain to their chakra network for as long as they have it active, with each successive post accumulating a stress counter. Each stress counter temporarily reduces the target's vigor and chakra by 5. This not only affects scaling, but temporarily affects the user's maximum AP and AP reduction resulting from high Vigor and Chakra. Stress counters do not affect the user or their stats while they are using their curse mark, but will immediately take effect after the user deactivates the mark. If a user's base stats would ever drop to 0 as a result of stress counters, they will die. Stress counters disappear at a rate of 1 per post that the user does not have their curse mark active, and all stress counters will disappear at the end of a thread.

This jutsu is slotless for anyone who possesses a curse mark from Orochimaru's Juinjutsu. Clans that possess innate abilities to absorb nature chakra, such as the Jugo clan, cannot learn this jutsu.

1st Stage:
Arguably the least comfortable to use of the stages, this is the stage that everyone is granted access to upon gaining the curse mark. When using it without training, it will usually cause the user great pain. When activating the curse mark, the target will roll a die. If it rolls an even number, the user can utilize it without trouble. If it rolls an odd number however, the user will remain paralyzed for 1 post, and the user will have to either deactivate the mark or roll again the next post, so on and so forth until they roll an even number. Additionally, if the user falls below half of their maximum AP (Shadow Clones and the like don't count), the user's curse mark will activate automatically, and the user must roll an even number before they can turn it off.

The user can negate these negative effects by learning to use and develop their curse mark. The user can either spend 2000 WC training to use their curse mark, or they can bypass this requirement by using another seal to suppress the mark when not in use, such as the Evil Sealing Method. Once this is done, the user can use this curse mark at will without the drawbacks mentioned above.

Stat Boosts: +50 to two stats (Chosen upon activation. Cannot be changed once decided)

Additional Effects: +100 AP upon activating this seal for the first time in a topic

2nd Stage:
This stage is the curse mark used to its fullest potential. It allows the user to alter their body and appearance to draw in even more senjutsu chakra from its surrounding area. It feels far more comfortable and even pleasurable for the user than the previous stage.

No curse mark user will start with this form. It must be either trained by spending 4000 words mastering the next stage of their transformation, or undergo some kind of near death experience designed to awaken hidden power, such as the Mind Awakening Pill. If learning this form through training, the first stage of the curse mark must be mastered before the user can begin training this stage. Upon meeting one of these conditions, the user is granted the ability to use this stage whenever they wish.

Stat Boosts: +80 to two stats (Same as those chosen at the first stage. These bonuses do not stack).

Additional Effects: +100 AP when activating this seal for the first time in a topic. Additionally, the user gains one free skill associated with their curse mark to represent the vast alterations that have occurred to the user's body. This may be extra limbs (such as wings), the ability to utilize advanced jutsu that you could not otherwise access (such as the Sound Five's unique techniques), or whatever else you might wish. This skill is subject to mod review, and may be rejected if it seems too powerful. This skill can ONLY be used while using the 2nd stage of the curse mark (or possibly Partial Transformation), and cannot be used in the user's base form. If for whatever reason the user loses access to the second stage of their curse mark, they lose the ability to utilize said skill.

Partial Transformation:
Skilled users of the curse mark can learn to use the benefits of the second stage on a lesser level by only activating it in certain parts of the body, sacrificing some of its power but not taking the full brunt of the physical toll it takes on the body.

This stage can only be learned after the user has mastered the 2nd stage of the curse mark. After that, this form can be mastered by spending 4000 words learning it. Unlike previous stages, there is no way to circumvent this cost (outside of word discounts and the like).

Stat Boosts: +60 to two stats (The same ones chosen at stage one. These bonuses do not stack with previous stages).

Additional Effects: +100 AP when activating this seal for the first time in a topic. Additionally, if you specified if/how your skill you gained in the 2nd stage may be used during a Partial Transformation, you may gain access to its benefits.

" They can choose to change stages once per post at a cost of 20 AP." - Please increase the AP cost when changing from a lesser version to a stronger version.

"the user can use the curse mark for one extra post before going over the duration, essentially extending its duration for an additional post." - I don't know how I feel about this, as I could switch between the lesser and stronger version at a measily 20AP to avoid the negative consequance of the Curse Mark.

"Should the user's vigor or chakra ever reach 0 through these stress counters, they will instantly die. All stress counters will disappear at the end of a thread." - With the structure of the technique and the user not being impacted by the effects until after finishing the transformation then logically you'd stay in the transformation for the whole thread to avoid the 0 stat death scenario completely.

" Stress counters will not affect the user or their stats while they are using their curse mark, but will immediately take effect after the user deactivates the mark." - The durations there for a reason so I think it's appropriate that the stress counters take effect as soon as the user surpasses the duration of the their Curse Mark.

"Additional Effects: +100 AP upon activating this seal for the first time in a topic" - Please establish that this cannot take the user above their maximum AP.

"Mind Awakening Pill" - Will have to be apped seperately.

Gonna list these in bullets to make it easier to address each point.

#1: I input that line in there as a reference as to how the user actually gains this boost in power. It doesn't grant the user any additional Nature Chakra Stacks

#3: Would you feel more comfortable if I removed this function of the technique?

#4: Hmm. That's an unintended consequence that I didn't think of. Circling back to number 3, would you feel more comfortable if I just removed it?

#5: Good call. Could we make it so that if the user's stress counters would cause them to reach 0 if they deactivate the mark, they would still die regardless of whether they had this technique active? I feel that might be a good way to prevent players from abusing the system like that.

#9: Hmm. Two stacks per post seems a bit much considering how far over the cool down this jutsu lets you go. Do you think 1 stack would be more appropriate? I'll refer to your judgement in this case.

#3 No, that's fine but limit it to a maximum amount of posts.

#4 Feel free to keep that in, just account for the work around that I mentioned.

Alright, everything should be added in! Tell me what you think

"If a user's stress counters ever get to a point where they would drop to 0 if they stopped using the curse mark, they will instantly die." - I think this needs to be reworded as it's confusing at first glance. Something along the lines of, if the negative impact of the counters brings any base stat to 0 they will die.

Got it. Reworded it