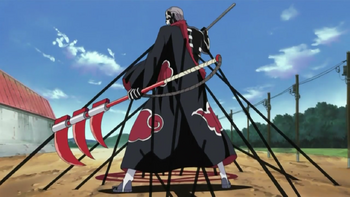 Handseals: Rat → Monkey → Dragon→ Boar → Dog → Bird / Bird (see below)
Duration: 4 Posts
Cooldown: Posts+2
Range: 20/10 Meters (see below)
Power: 62 (see below)
Speed: 62
Health: -
Stat Boosts: -
What it does: After the user completes the handseals, up to 5 tendrils can form at jutsu speed. The tendrils are 3 meters long and 3 inches wide. They have a sharpness of 62. They can be manipulated at the user's will as long as the handseal is maintained, they can penetrate any target and hold them in place, the target and the user do not imitate the actions of each other. The target can break the hold if they have greater strength than the current power of this jutsu. The tendrils themselves are physical and, therefore, can interact with any physical object.

Handseals: Handseals are only necessary if there is no current shadow jutsu of the user in place. If they have one active, the users can change it into the Shadow Stitching by just paying the activation cost (they still have to pay the upkeep for the previous tech this turn, but the next turn, the upkeep for the current version of the technique will take over), and holding the Bird seal. This effect works both ways. The origin of the shadow spears can't manifest within 1 meter of another character.

Range: The 20 meters include manipulating the tendrils, so if a tendril is made at exactly 20 meters, it could only be manipulated upwards or back towards the user. If the tendrils are formed from an existing shadow that doesn't belong to the user or is not one of their shadow jutsu, that shadow must be within 10 meters of their location. The origin of the tendrils cannot be formed within 5 meters from the target.

The user cannot activate Shadow Stitching in utter darkness without a source of light.

Hello Ryuuzaki, I'll be the Trial that'll look over your app.

So for the power and speed you can go 50-69 since it's an A-Rank technique, you can keep your current numbers as they are if you want but just letting you know. Take note that for every 2 point in power the jutsu is from the beginning marker it will require 1 additional action counter, and 50 more words to learn. So depending on what numbers you'd like to use you'll have to change the wordcount and maybe the AP cost depending on the numbers you'd like the technique to have.

Since the tendrils are able to pierce, I would just mention sharpness equals technique's power.

Honestly for the power I feel like you're selling yourself short, personally I think you can remove this part since the tendrils power = sharpness. Again, you can keep it the way it is but I think each individual tendril can have a power/sharpness of 50-69.

Lastly I'd also like you to mention that the tendrils can't be formed 5m away from another character since this is an offensive technique.

I'll take another look after the changes have been made.

Change the number of total tendrils to 5.

Change jutsu range for me to 20 meters. 10 when the tendrils are created from a pre-existing shadow.

Free manipulation is not cheap. Usually, the upkeep is the same as the activation cost, in this case, 46 ap.

Re-approved per discord discussion
-fixed wording that allowed for potential hitscan
-specified how far the origin of the shadow tendrils can be when created from the user’s shadow jutsu or a pre-existing shadow.