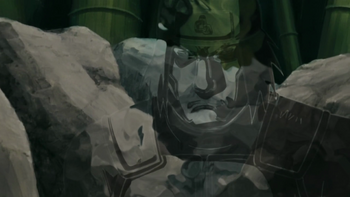 Handseals: Dog - Bird - Hare - Monkey - Horse
Duration: up to 4/5 posts
Cooldown: posts used +2
Range: User
Power: 30/50
Speed: 30/50
Health: 30/50
Stat Boosts: -
What it does:  Chakra is molded around the body to reflect light in order to make the user's body, breath, shadow, and weapon to become invisible to the naked eye. The user can become detected by sound, special sensory dojutsu (ie Sharingan, Byakugan), or those with a chakra sensory techniques of higher power than this jutsu. This technique is usually used before combat is initiated, but can also be used during combat. When the user takes damage equivalent to Jutsu Health, the technique will forcefully stop.

If a user were to pick up an item that was not already invisible on the said user, the user could apply the technique to that as well. The item will only stay invisible along with other items while on the user's person. Users cannot make other organisms invisible until they level the technique to A-rank. If the technique is leveled to A-rank then the user might make another organism invisible for the duration of a maximum of 2 posts at no additional cost. However, they must make physical contact with them to do so. The user and the targets they choose to turn invisible, living or otherwise become so at jutsu speed.

Re: Hiding with Camouflage [v7]

Discussed on discord and edited accordingly.