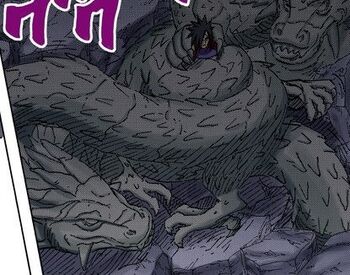 Handseals: Snake, Ram, Hare, Ox, Dog, Snake/ Snake, Ram, Hare, Ox, Dog, Monkey, Snake
Duration: 3/4 Posts
Cooldown: Posts used +2
Range: 35 Meters
Power: 60/Vigor
Speed: 60/Vigor
Health: 60/Vigor
Stat Boosts: -
What it does: After performing the corresponding hand signs, the user can form a 10x10 meter Chinese serpent dragon capable of flight from any user-created wood source within 30 meters of the user and not within 5 meters of another character or within 10 meters of the user from the earth and further than 3 meters away from another character. The user can guide the dragon through places they can visibly see. The dragon can only travel up to 35 meters away from the user before they lose the ability to guide it entirely. Upon making contact with a target or object that possesses chakra, the Wood Dragon will attempt to constrict and bind the target, biting it and absorbing chakra from them. The dragon drains AP equal to the jutsu power of its current jutsu power upon contact, reduced to half jutsu power during the following posts if contact is still held at the beginning of them.

Additionally, the wood dragon can serve as a medium for the user's other wood release techniques. If the user possesses Wood Release Cutting, they can channel it through the dragon. The user performs the hand seals for the technique, and the dragon opens and fires through its mouth instead. The branches channel through the branches is doubled in size. If the user possesses the Wood Clone technique, rather than needing to create wood clones from their own body, the user can create the dragon's clones by performing the technique's hand signs and touching the dragon afterward. The head controls the dragon, and unlike most techniques that need to be destroyed, or the dragon has to lose more than half of its body. At s-rank, the user can form two dragons instead of one.

I would prefer this only being from the users created wood source instead of natural. Gives way too much in terms of a controlled area


through places they can visibly see or detect through other means, even travel underground.

This is going to be a no from me. Visibly seeing is fine but not with detection. And seeing as this is a wooden construct and not an earthen one I'd like it to be limited to moving on land only considering this can fly as well.

This technique already does so much so please remove the explosion as well. Thats all for now

There also needs to be a separate set of handseals for the S rank version too.

I'm going to have to ask that you remove the additional range off of the Wood Release cutting bit as well as the delayed triggering of the Wood clones.

i am also going to have to request that you remove the mention of having the wood dragons doubling in size at S rank. There's already a lot going on with the tech as it is.