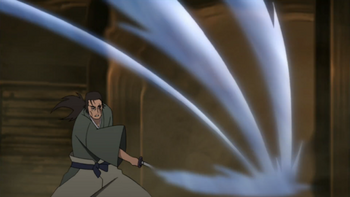 Handseals: N/A if non-elemental. If elemental: Tiger, Ox, Rabbit/ Tiger, Ox, Rabbit, Monkey.
Duration: 1 Post
Cooldown: 2 posts
Range:  20/25/30 meters
Power: 30/50/Speed or Vigor
Speed: 30/50/Speed or Vigor
Health: -
Stat Boosts: -
What it does:  While infused with the wielder's chakra, the user swiftly swings their chakra-enhanced weapon to strike an opponent, releasing a small two-inch wave that expands into three-inch thick, five-meter wide waves of chakra to cut a target. For every ten-speed over the power of this jutsu, an additional wave can be released simultaneously, three feet apart from each other, up to eight waves. The user isn’t required to weave hand signs or have the Ninjutsu specialty to learn and use the technique. However, if the user has Ninjutsu as a specialty, At A-rank can take on one basic elemental property. It can take on two basic elemental properties at S-rank and increases how many additional waves can be created by two. When infused with an element, the technique scales off of Vigor. Taking two conflicting natures makes it unstable and reduces the range by ten meters before dissipating.

Fire Infusion - The waves no longer cut but instead create fiery explosions in a five-meter radius when making contact.

Water Infusion - The waves leave a trail of water that can be used for water techniques and enlarges the waves by three meters in width.

Wind Infusion - The waves can travel up to 40 meters and select a homing target when generated. It will avoid preexisting obstacles but not new obstacles when launched.

Earth Infusion - The waves can no longer cut but instead adds a health stat of 30/50/Speed, depending on the rank used. When the waves make contact, it attempts to constrict and crush whatever is caught in its clutches, powerful enough to break bones. Anything with more strength than the power of this jutsu can resist and escape.

Lightning Infusion - The waves now have a paralytic effect that causes nerves to act sporadically. When it makes contact, if the victim has less strength than power of this jutsu, it prevents the target from using hand signs for a post. They can still maintain existing techniques.

Hiya Kiz, I'll be the trial looking over your Rupture app.

Could you mention how long those waves are? I'd also like to see a limit on the additional waves that can be created, maybe like 8.

Does the wave have any sharpness to it? Or does it only have jutsu power?

Can you phrase this to say 3in thick, and 5 meters wide? I believe that's what you're implying but the wording seems is a bit strange.

Are all of the waves released simultaneously (all 8 waves shoot out at once)? If so, what type of spacing is there between each wave? Or is each wave released after the one that precedes it?

Edited, it only has jutsu power following the normal scaling rules.

Cool, thanks for the clarification. Approved.

I'd say that now this is a Weaponary x Ninjutsu tech since each wave is taking on elemental properties. Because of that, I don't think that there's a couple things I would like to see added here:
- Add ninjutsu to the spec type
- Make the elemental slashes now scale from the vigor stat instead of speed
- I'd like to see some handseals required for the A/S rank version now, but not at the typical requirements. Maybe 3 for A rank, 4 for S rank.
- Since this is multi rank, I'd like to see the size/range/quantity of the waves increase with rank.
- For duration just put 1 post. Leaving it blank is kind of ambiguous. Just caught that, sorry.

For wind infusion, can you add that the "homed" target is selected upon generation and cannot be changed after the fact?

For lightning infusion, I am having a hard time rationalizing why it would make the wave soundless and invisible...

How does this work if someone is using two elemental infusions at S rank? Does each wave generated now consist of the properties of 2 elements? Does it alternate with each wave? If it's the former explanation, I could see several combinations that work against each other...