Name: Suffocation by Water Technique
Element: Suiton
Rank: A
Specialty: Genjutsu
Special Jutsu Type:
Backstory: A technique where water ninjutsu specialists would suffocate enemies had existed for over centuries. An aspiring genjutsu specialist had thought, "what if they made their enemies believed that without actually drowning them?". The idea behind the technique was to keep the sensation of suffocating under water thrown at a greater range in exchange for the damage. 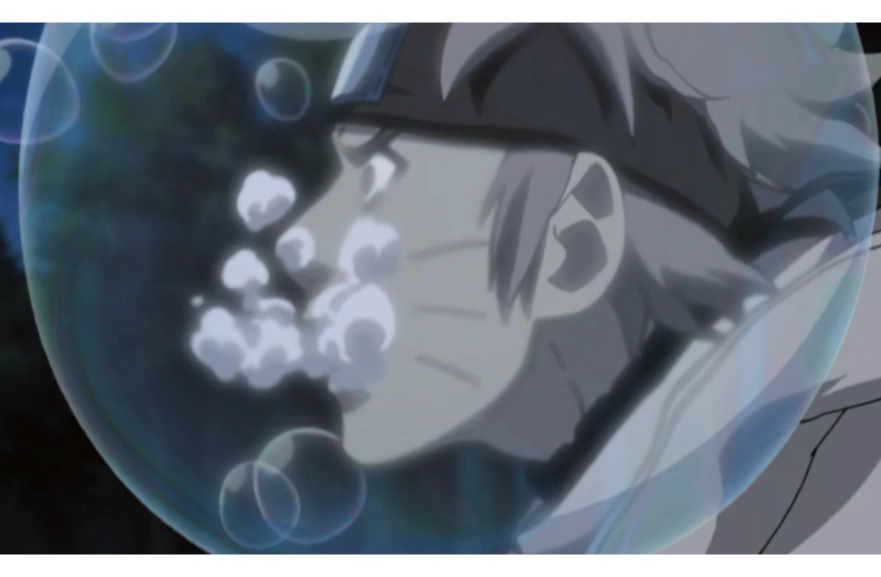 Handseals: Dog> Horse > Hare > Ram > Tiger
Duration: 3
Cooldown: +2 from duration
Range: 30 meters
Power: 50
Speed: n/a
Health: n/a
Stat Boosts: n/a
What it does:
This genjutsu works under the sensory of touch. An enemy that is touching the water (saltwater, rainwater, bubbles, water from jutsu count) that the user is touching, regardless of quantity, will be placed immediately under the genjutsu when cast. The water must come from a jutsu controlled by the caster in tangent to this technique. In this illusion, the water the enemy touch slowly rises and spread out across their body until they are in a big bubble of water or water entraps around their head. Their mind will have them believe they are suffocating in this water bubble, but in their sense of breathing is impaired, and thus the illusion of drowning. Even those not-effected would see the effect of water surrounding a target and the visual of drowning from the outside of the body of water. The affected party will struggle for breath, suffering damage slowly due to 'oxygen deprivation' and believe they are drowning. This technique will 'drown' after three posts following casting, till they pass out or 'drown'.

The following posts happen from the preception of the enemy:

First Post: The water forms and entraps around the enemy's head or body depending on the contacted body of water. The initial shock of water starts the process.

Second Post:  The water encircles and remains constantly in place around the victim, the water illusion causing the sensation of a lack of air and no way to breathe. The water cannot be drunken to remove.

Third Post: The water surrounding the enemy's body will cause the victim to naturally struggle for breath. If the enemy gasps for air they will believe they are not getting any. The genjutsu targets a stress response at this moment in the brain causing them to hyperventilate which they will confuse for drowning as more of the water will be felt pushing through their body into their lungs. (IRL people can hold breath approx 30sec-2m and these enemies are trained killers so this is post-worthy) The target will pass out for the remainder of the topic and the 'water' will disperse.

Why was the name of this jutsu changed? And did you do anything to revamp the contents of this jutsu? It seems nearly identical to the V6 version. Most genjutsu techs don't require revamps, as they scale from chakra in both V6 and V7. I see you tweaked some of the numbers here but I am not too certain why. Just looking for a bit of your thought process as to why this should be revamped while simultaneously keeping the bulk of the jutsu the same.

I do have some comments on the use of this though...

So at which stage during this jutsu do the paralytic effects come into play? I believe the rule of thumb is that the target much be successfully under the effects of the genjutsu for 2 posts.

To be honest, I don't think paralysis is the correct status ailment for feeling like you are drowning unless it's implying that the user is paralyzed by the fear of dying via drowning. Otherwise I would think that falling unconscious would make more sense, as that would be a more logical response to feeling like you can't breathe.

Well the name i choose something a bit different, to my opinion of a less-wordy name. If t hat was not allowed, sorry. Also touched up some of the wording but yeah its effects are the same.

If the effect needs to change, i would get rid of paralysis for the drowning and unconscious effect after the timeframe. But this jutsu wasn't made by me, so wasn't sure how much I change. Please let me know what you feel would be more appropriate to change and Ill do it. But yes, I imagine unconsciousness is more reasonable for drowning via 'oxygen deprivation' genjutsu. Esp like Utakata bubble drowning effect-- which the illustration is from

I would think the name should revert back to its original, in the case that people search up the jutsu name by what it was formerly known as.

Regarding the effect of the jutsu, consult this:

Spoiler:
"- Maintaining a Genjutsu that causes a form of paralysis to a target takes quite a bit more focus than other Genjutsu. Due to this, while maintaining a paralysis effect Genjutsu the user is unable to cast any new jutsu. Only previously activated sustainable jutsu such as enhancers, shadow clones, and the like will be allowed to stay active, but no new jutsu may be cast.

-Sleep effects on Genjutsu cannot affect a target immediately and instead the target must be under the genjutsu for at least 3 posts before it can put them to sleep."

I am fine with either, but for whichever you choose just make sure that it follows the rules of either sleep/loss of consciousness or paralysis. Almost try to make the logic within the app explain that better (is paralyzed with the idea of suffocating to death, or feels like they can't breathe because of the genjutsu so they pass out).

Could you maybe also add how the genjutsu is activated? Does the water for the genjutsu need to originate from a jutsu of the user? I would think so... and I think this might also be a good alternative for the unconventional means of casting, like when its being used via rain/bubbles/etc. In these cases I fail to see how both the user and the target would ever be touching the same rain drop or bubble.

I made the changes. I removed paralysis to a full drowning sensation and KO after 3 posts under the illusion of watery death. Water from own chakra must be used for contact, or controlled by it at least. And changed name back. Honestly not the best name ... but what can I do? >< Anyway awaiting revision