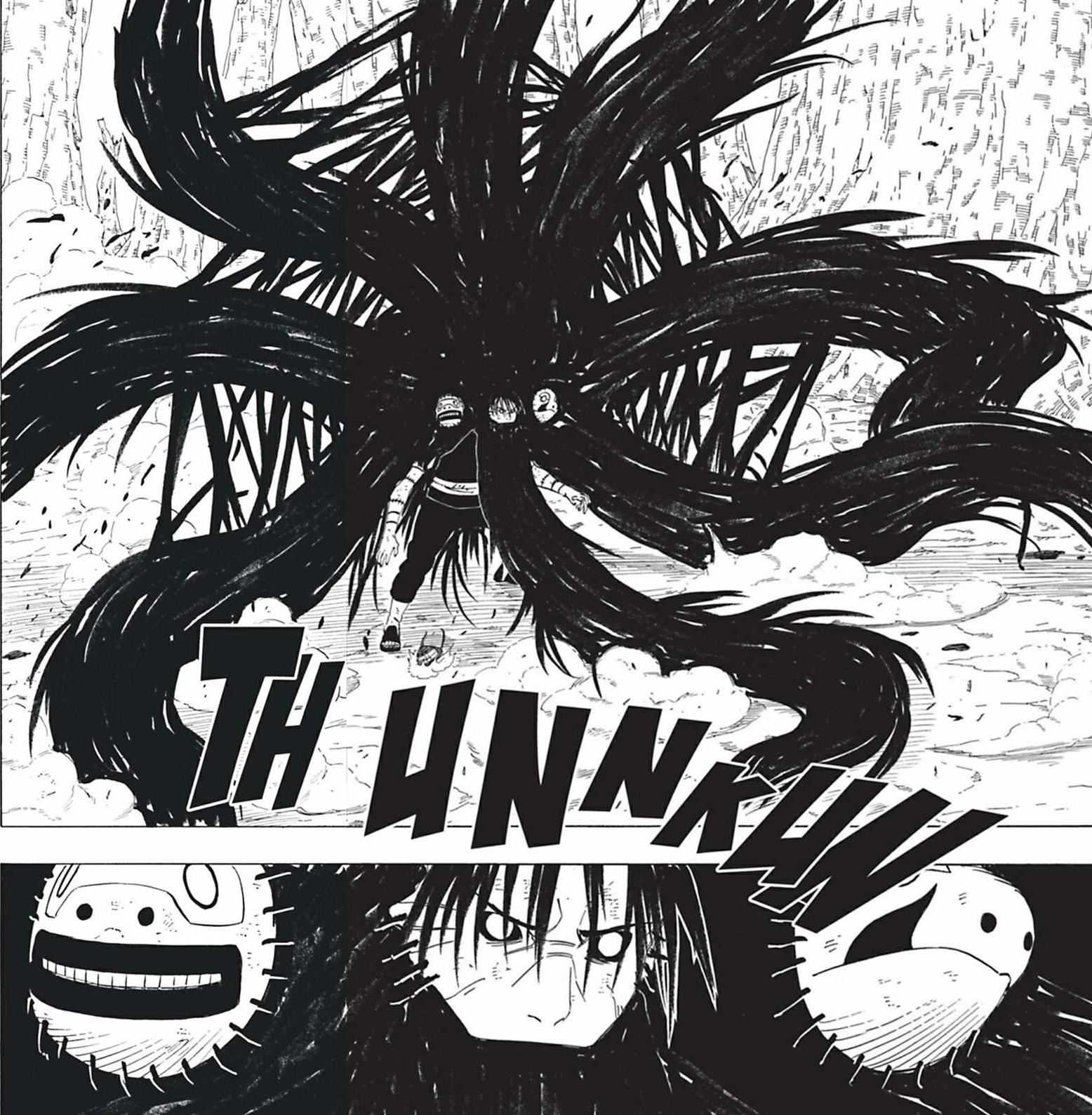 The user of this technique is able to expel the hearts that they have assimilated from their bodies and have them take on the form of "Masked Beasts", the size and shape of which are decided by the user upon their first use of the technique (unable to be altered after this). There are a couple of limits regarding the forms the beasts can take though, they are unable to be any larger than 5m in overall height, and they are unable to have more than a total of 8 limbs. The user is able to 'see' through the 'eyes' of the beasts, allowing the user to control all of their actions simultaneously and making it seem as though they attack independently of the user, when in reality they are controlling the beasts directly with thought alone. These Masked Beasts are capable of flying and moving at jutsu speed, although they must remain within 75m of the user at all times, and all have 'claws' with a sharpness equal to jutsu power. They are capable of using the threads that they are made of freely, at speed equal to jutsu speed, with the threads having tips that possess a sharpness of jutsu power and a binding strength of jutsu power. These threads can be up to 2 inches thick, and are able to extend up to 5m away from the 'body' of the Masked Beast, although it should be noted that the beast is unable to move when extending or manipulating their threads.

These Masked Beasts are capable of using any A-rank and below Ninjutsu that the user knows of their respective elements, without the use of handseals, but for techniques of S-rank the user is required to form the Handseals before the Masked Beast is able to perform it. The Beasts are unable to use any techniques of other elements or without elements, thereby locking them all to one singular element only. The AP for these techniques is equal to the base AP cost of the technique, regardless of any discounts that the user possesses, and the AP itself is deducted from the pool of the user of this technique. Up to 2 Masked Beasts are able to fuse with each other, thereby creating one beast with two masks and thus the ability to use 2 elements, but these beasts are still unable to use any forms of Advanced Elements. Only one Masked Beast may be created from any one elemental heart, meaning the user can possess a maximum of 5 at any one time, with 1 of each element. The user is capable of performing Collaboration Techniques with their Masked Beasts, and the Masked Beasts are capable of performing Collaboration Techniques with each other.

The Masked Beasts can be 'killed' by destroying the Mask itself, which houses the heart of the beast, and possesses a static health stat of 150. The threads that make up the body of the beast are also able to be destroyed, but the threads themselves will regenerate within 1 post of the 'injury' if more damage is not done, or the mask is not destroyed.


When this aspect of the technique is used the user will merge with their Masked Beasts themselves, thereby creating a new form that is a mixture of user and Masked Beast. This form can only be attained if the user merges with 2 of their masks, but they are free to merge with more if they so desire. Whilst in this form the masks of the user will sit above and beside their face, still capable of using jutsu as they were before without the need of handseals, but instead losing the ability to freely fly and move around. The Merged Form focuses almost entirely on keeping enemies away from the user, this being done by forming 8 large tendrils of threads, each 25m in overall length and 1m in thickness, that the user is able to freely control at Jutsu Speed and that hit/bind with a strength equal to Jutsu Power.

Both the Masked Beasts and the Merged Form can be used at the same time, but doing so will increase the upkeep cost of this technique to 100 per post

Wassup pimp. Looks sweet but I just have a couple things here, primarily on the Marked Beasts section.

"The user of this technique is able to expel the hearts that they have assimilated from their bodies and have them take on the form of "Masked Beasts", the size and shape of which are decided by the user upon their first use of the technique (unable to be altered after this)."

Could you specify any limitations that these forms would have? Whether it's height/width, # of limbs, etc.

What do you think about giving these Marked Beasts stats their own individual stats? Maybe they can function like LC's in the sense when upon creation they get assigned a stat cap that can be distributed among each field as per the user's discretion?

How many hearts can be projected into their Marked Beasts form at once? Would it make sense to have the upkeep scale off the # of Marked Beasts expelled? So a base of 50 upkeep, and + 5 or 10 per beast expelled.

Also could you link the original to this?

To be frank I am very much against that idea.

If you look in the second paragraph of the masked beasts section, near the end, you will find the limits of how many can be out at once. If I am misunderstand what you asked just lemme know. Added increased upkeep depending on how many Beasts are being used

Linked the 'former' version of the tech

thanks for the edits chief, trial approved