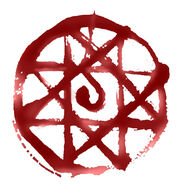 Handseals: Horse -> Tiger -> Boar
Duration: Until cancelled or broken
Cooldown: 3 posts
Range: Physical contact made between user’s palm and target’s body. Blood absorption proximity explained below
Power: N/A
Speed: 20, Indicative of the speed at which the seal is capable of absorbing nearby blood
Health: 20
Stat Boosts: N/A
What it does:
The user applies a blood seal onto a target. This seal serves as a medium for the user’s blood based chakra. It is able to function autonomously to absorb nearby blood (within 2 meters of the seal), meaning that the user is able to insert their blood into whatever is marked with the seal (scrolls, items, people, etc.) via direct contact or from residual blood within close proximity of the seal. The seal is typically applied to a human, where the seal itself would penetrate the dermal layer of the skin, not actually dealing any damage. Note that the blood seal bypasses clothing but not armor. This introduces a small but valuable amount of the user’s blood and chakra into the cardiovascular system of the recipient of the seal. Applying this seal itself has no effect on the target. Its full potential is only truly realized when followed up by one of the derivative jutsus.

I take it this seal is applied via contact; would just a brush of a finger work, or would full palm contact be needed?

edited, lemme know what you think about the seal bypassing clothing and armor

Clothing but not armor is ok, I guess. If a full mod disagress, they'll let you know.

This jutsu seems to have a lot of potential for abuse, but mostly only because of the derivatives, so I'll approve this for now, and we'll look at the derivatives later.