Appearance: Transparent and red ghoul-like demon heads of fire chakra, resembling lanterns coalesce the air surrounding the user. Each demon head is half a meter in radius. 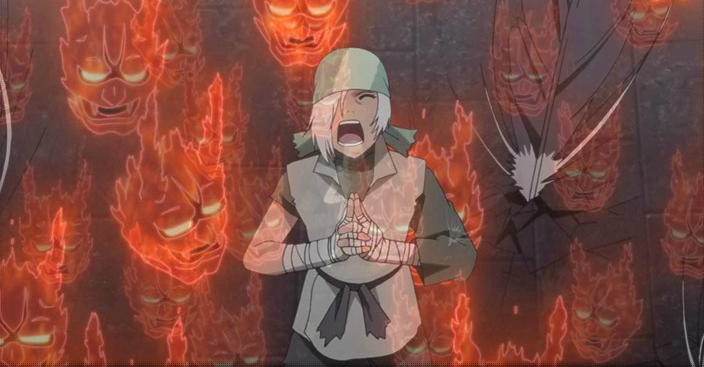 Handseals:
B-Rank: Dog → Horse → Snake  →  Tiger
A-Rank: Dog → Horse → Snake  → Dragon → Tiger
Duration: Up to 4 Posts
Cooldown: Posts Used +2
Range: 25/40m
Power: 40/60
Speed: 40/60
Health: N/A
Stat Boosts: N/A
What it does: Over the course of 4 Posts, the user concentrates their chakra as up to 3/4 (B/A) demonic heads of fire chakra spawn around them within a 10-meter radius at jutsu speed. Whether it'd be spread across the 4 Post duration of the technique or all at once within 1 Post, the number of demon heads formed is at the user's discretion. These demon heads cannot spawn within 5 meters of another person and cannot spawn within 1 meter of the user. Upon being formed, the user can telepathically fire each demon head towards a target or area of their preference, the demon heads traveling towards a target(s) at jutsu speed. The demon heads usually travel in a straight line until reaching maximum distance or when the duration of the technique expires, in which the construct(s) will fizzle out instantly. However, each demon head has the ability to "curve" at will up to a 90-degree angle in any direction of the user's choosing. The constructs can only be manipulated in this manner only once; after that, they will travel in a straight line as usual.

At the discretion of the user the demon heads will immediately revert into their natural state, being Fire Release as an explosion of fire chakra 7.5/10m (B/A) in radius will expand outward from the demon head at jutsu speed and power, burning anything that is caught in the explosion and destroying jutsu that have power less than this technique's jutsu power. Upon reaching maximum radius, the explosion will dissipate instantly as well as the demon head used to facilitate the explosion.

I believe that the rule states that defensive techniques can be created within a meter of the user. I know this isn't a defensive tech, but I think that 1 meter proximity to the user would still stand.

Besides that, this looks solid.

Edited, sorry for the wait

Thanks my guy, trial approved.