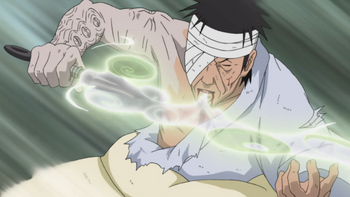 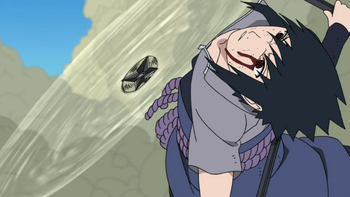 Handseals: Horse > Ram > Rat > Hare > Boar > Bird > Horse > Ram > Rat > Hare > Boar > Bird
Duration: 4 posts
Cooldown: Posts used +2
Range: Held Weapon for casting, 20m if thrown
Power: Vigor Stat
Speed: Vigor Stat
Health: Vigor Stat
Stat Boosts: -
What it does: After performing the required handseals and taking a deep breath, the user manipulates the chakra in their lungs and exhales a small cloud of chakra infused wind onto a bladed weapon they are currently holding, coating the weapon in wind chakra, replacing the original weapon with one of chakra, meaning the weapon's stats are replaced with this jutsu's stats. Usually, this will be a very thin layer, barely noticeable aside from its plume-like shape and green coloration, but they are able to transform kunai and knives into a makeshift sword, or extend a regular sword into a greatsword. Note: only the length is increased, but not the width.

If applied to a shuriken specifically, the transformation is remarkable: blowing chakra onto a shuriken will extend it's cutting range by spinning and compressing the chakra onto itself, becoming thinner and thinner until it's a hair-wide 1m diameter disk, and once thrown the blades will stay for up to 20m away from the user; after these 20m, the wind blades extinguish.

Hey dude. This kinda looks like an amplifier, as you're using it to boost the stats on an item. We'll need to cap that at 70 for an S-Rank, and we need the Special Technique to be listed as an amplifier. Also need to update the rank on the tech to S-Rank (currently showing as B-Rank). You could also lower the hand seals by a couple (10 should be sufficient)

I put it as 12 Handseals because it's a Vigor Stat technique.

I think the concern for me stems from the fact that the wording hints that you would be increasing the weapon's stats. Would you be amenable to modifying the technique's wording to state that it replaces the weapon's stats with the stats of this technique (Technique Health/Sharpness becomes the weapon's health/sharpness)?

Replaced wording to imply it will replace the stats for jutsu stats.

How far can a weapon be from the user's location to be coated with the vacuum blade?

Also, it is unclear if they have to hold the weapon first.

I specified the range is held weapon, and included a mention of held weapon on the description as well.