Appearance: The user exhales a thin stream of fire before expanding to a massive explosion of flames to encompass an area. 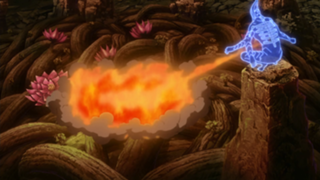 Handseals:
A-Rank: Rat → Ox → Dog → Horse → Monkey → Boar → Tiger
S-Rank: Rat → Ox → Dog → Horse → Monkey → Boar → Ox →  Horse →  Tiger
Duration: Until Maximum Distance is reached or 4 Posts for holding the jutsu
Cooldown: Posts Used +2
Range: 50/70m | 20/25m Radius
Power: 60/Vigor Stat
Speed: 60/Vigor Stat
Health: N/A
Stat Boosts: N/A
What it does: Upon forming the necessary handseals, the user exhales a thin stream of fire towards a target and or area that is 6 inches wide at jutsu speed, much like its sister jutsu: Great Fire Annihilation. Unlike Great Fire Annihilation which will rapidly expand into a wall of flames, Majestic Fire Destruction will continue as a stream of flames at jutsu speed until reaching maximum distance in which it fizzes out instantly, coming in contact with an object or person, or if the user forcibly detonates the stream. If the latter two scenarios occur, the true effect of the jutsu will activate. Upon coming in contact with an object or person, the endpoint of the stream will rapidly expand outward into an explosive stream of flames at jutsu speed, the endpoint of the stream functioning as an epicenter for the expanding stream. The explosive stream of flames will expand outward before reaching a maximum radius of 20/25m at jutsu speed (A/S), meant to linger on the battlefield, setting the area ablaze. The user can keep the explosive stream active once reaching a maximum radius by holding the Tiger handseal, letting the stream active for up to 4 Posts before going on CD. Additionally, the user can self-detonate the stream instead of waiting for it to come in contact with an object or person with an additional AP cost of 20 and by forming the seal of confrontation to trigger it, still expanding at jutsu speed for the explosion.

The flames emitted from the explosion are dangerously hot which burns at jutsu power, being able to cause severe burns that require medical attention or even turn others to ash due to the intensity of the flames. Jutsu that come in contact with this technique and have power less than jutsu power will be destroyed and go on CD due to being overpowered by the flames.

It should be noted that the user is able to choose to have the technique not detonate via contact.

I think this looks solid. I would just have some comments here. My only comment would be since this can be mastered, it would be nice to see some type of benefit for mastery. Maybe if the user masters either rank, they don't need to be stationary?

Trial approved, sorry for the wait

We need a handseal to trigger the remote detonation