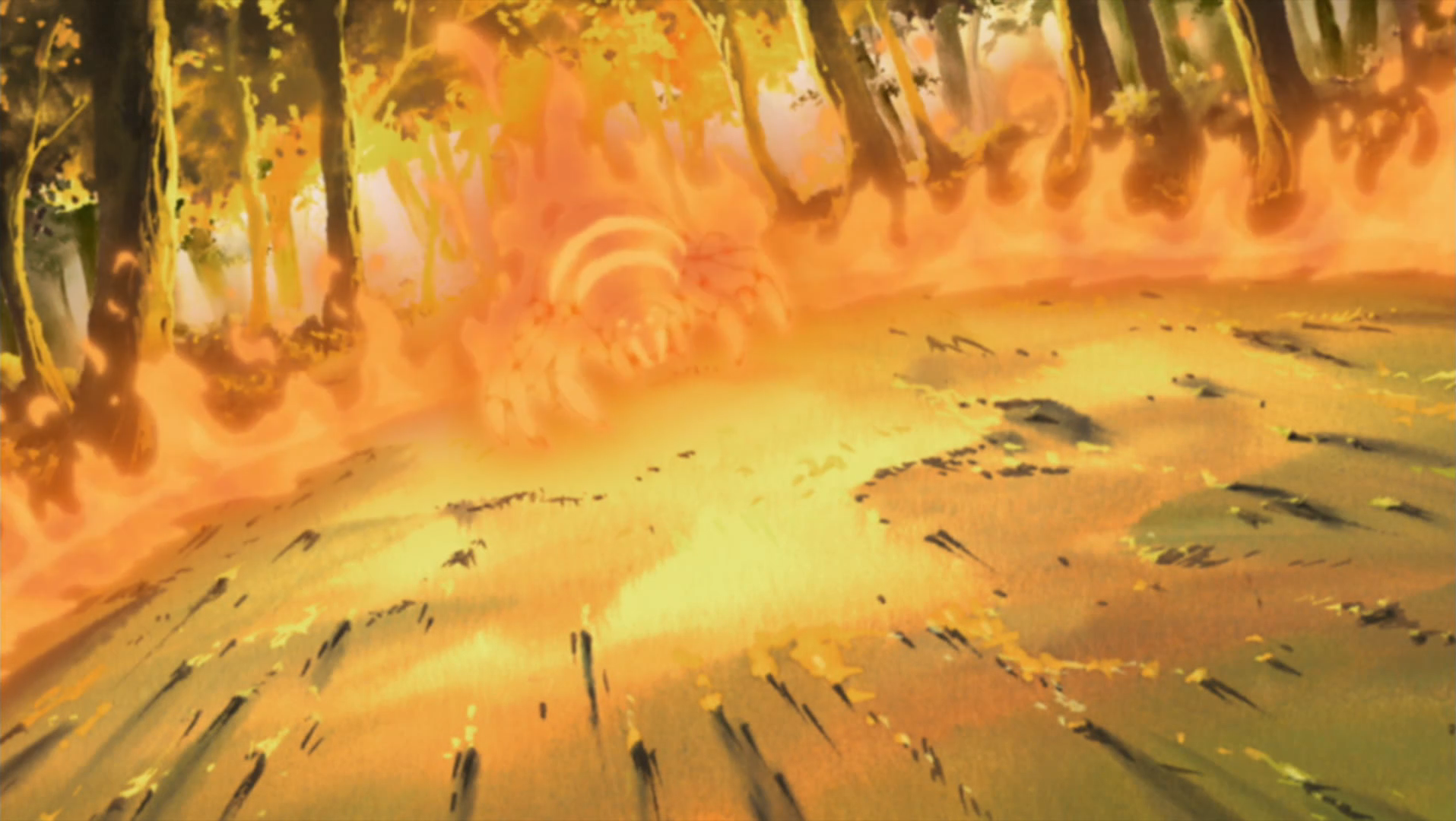 Handseals: Tiger > Horse > Rat > Dog > Tiger [Held]
Duration: Up to 4 posts
Cooldown: Posts used +1
Range: See below
Power: 35
Speed: 35
Health: --
Stat Boosts: --
What it does: The user spews a 2m x 2m fireball from their mouth with a maximum range of fifteen meters. This freball travels in a straight line, and if it makes contact with the ground, it will morph into the shape of a blazing tarantula composed of fire at the point of impact. This spider is two meters tall, wide, and long. At the same time the spider forms, a ring of flame twenty meters in diameter spreads from the point of impact. The point of impact acts as a point on the perimeter of the final circle of flame, with the fire spreading symmetrically on both sides, meeting twenty meters from the point of impact to complete the circle. The boundary of flames this creates is half a meter thick, and one meter tall.

While the user holds the Tiger handseal and maintains the technique, they are able to manipulate the motion of the spider. The spider moves at jutsu speed, and is not solid, inflicting severe burns as opposed to blunt damage or punctures. The spider cannot leave the boundaries of the ring of fire. If the user is forced to release the Tiger handseal but does not end the technique, the spider stops moving completely - totally freezing in place until the handseal is resumed.

When you mention the spider not being able to move when the tiger handseal is released, what type of movements does this include? All movements? Would want clarification here so that people could know if it cannot attack/defend, or it simple can't move from its current location.

Regarding the blistering web interaction, I would be curious to see what the revamp of that tech looks like before I can add any comments. Bur my general perspective would be that I would need more details on the spider's functional capabilities if formed underground. Can it move through the web and through the earth? Would its movements and/or formation disturb the earth?

It would be interesting to see what type of effects this could be paired with if the user has both fire and earth release.

Costs updated. Clarified that the spider totally freezes up.

I was figuring Blistering Web is so recent and well-designed that it wouldn't change much, but I'm willing to put this tech on ice until that one is brought up to snuff.

Added that the spider disrupts the ground and has warning signs if it is about to surface.

Left the earth stuff alone for now, I just woke up and I dunno what I'd add there that wouldn't make this feel bloated. Any ideas?

thanks for the edits, trial approved. my only idea was that if the user has earth release, the spider might be able to move through the surface of the earth without causing a disturbance