Appearance: Violet 'flames' of chakra coat the user's fingertips, and create an array of five swirls on the target's body. If using the Five Elements Unseal, the 'flames' are blue. This is a purely aesthetic visual effect, though having the seal applied to you does sting a little. 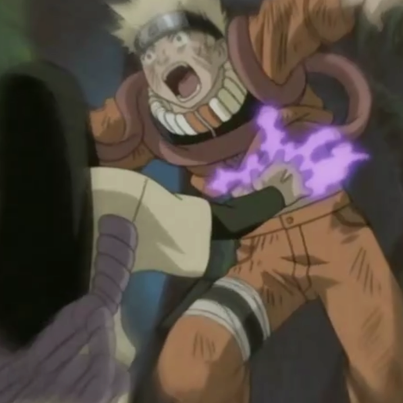 Handseals: --
Duration: 1 post (placement), permanent (seal)
Cooldown: --
Range: Touch
Power: 50
Speed: --
Health: --
Stat Boosts: --
What it does: Placed through direct contact between five fingers of one of the user's hands and the target's bare skin, this seal disrupts the flow of the target's chakra, debuffing their Vigor and Chakra each by 30. This debuff's numbers cannot be increased in any way. It must be placed on the torso, throat, or head - the stomach or spine is considered ideal by fuinjutsu aficionados, but any of those spots will do. It will be ineffective if placed on the target's limbs. While the seal is in effect, any of the target's techniques listing specialties that are Chakra or Vigor primary cost double AP.

If the application of the seal reduces any of the target's stats to under 30, the strain of their chakra network's disruption knocks them out cold for the remainder of the thread.

If applied on a jinchuuriki, this seal disrupts the connection between the target's chakra network and their bijuu seal, preventing them from accessing any of the bijuu's chakra (and therefore cuts off access to any cloaks, elements, etc. that they would have gained from the bijuu). If the target has mastered their bijuu, this effect is nullified.

This technique cannot be broken by Fuinjutsu Breaking - it can only be removed by itself. When used in this fashion, it is known as Five Elements Unseal, and features blue flames. In a pinch, it can also generically break seals weaker than this technique's power, if you're too cool to use the basic Fuinjutsu Breaking or something.

Personally I think with the effects on jinchuuriki that takes the potential of this technique from an A rank to an S rank. Not necessarily a bad thing, as that's pretty strong. I think it would be best to choose one stat to debuff by 50, probably Vigor, as that would be the most detrimental and likely to cause someone to pass out. Debuffing chakra would just make their abilities weaker and unable to perform higher ranked jutsu, right? Personally I am fine with this not having handseals since it can't be mastered.

I think my instinct would be to nerf this technique as much as necessary to keep it at A rank (to match canon). We could tone down the effects it has on Jinchuuriki, perhaps, or have it not affect Jinchuuriki who have the mastered cloak? Or just remove it altogether, I don't think anybody was very fussy about the previous version not having it.

My reasoning for having it debuff both stats was that it's meant to be disruptive to the entire chakra system, so it would also affect Chakra-based techniques too. As per the special technique guidelines, character debuffs target two stats, but if the knockout effect is considered powerful enough to warrant removing one of the debuffs I'm good with that (or splitting it to a 25/25 debuff, perhaps?)... or the knockout effect could only take hold if Vigor is knocked below the threshold.

You could probably have it at A rank and make it such that it has the aforementioned effects on an jin with unmastered cloaks.

But yeah, a 25/25 split to Vigor/Chakra seems more appropriate for an A rank tech rather than a 50/50 debuff. But keep in mind that A rank techs can go up to 69 in power. So you could do like a 34/34 split. Or to make the numbers whole, a 30/30 split. Just tryna brainstorm with you. Imo debuffing a total of 100 stat points just seems too high

Added the note that Jinchuuriki that have mastered their bijuu are immune to that effect, and made it a 30/30 split!

Seems fair to me, trial approved. Thanks for your revisions.

Well made. I like the fact that this takes after the canon aspects and usage for it without being too overbearing. Approved

made a quick edit as per discussion on discord. Also adjusted wording on the double AP cost as previously it wouldn't technically affect non scaling techs like boosters