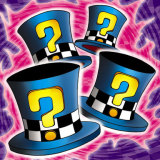 By attaching these threads to a puppet, the user can manipulate and use it in battle—puppets cannot be made to fly with this skill, but they can float up to two meters off the surface puppeteer is standing and move at manipulation speed. One may only form a single thread from each finger. The speed at which the threads allow one to manipulate a puppet is the average of chakra and speed, while the strength of said puppets can be found by averaging the user's strength and speed. Furthermore, these strings have a range of 100 meters, a health of 50 and are treated the same as jutsu (i.e., +20 power to break, but health does not scale) from anything capable of dealing this amount of damage (jutsu, weapons, bare hands, etc.). A user's threads cannot get tangled on each other and pass through other chakra threads controlled by them.

Cost: To use any number of chakra threads, it costs 5 ap per post.

Chakra Suppression Synergy: A user may make their chakra threads invisible to the naked eye if they know the chakra suppression skill. Those with chakra vision can, naturally, see these threads even when suppressed. To maintain invisibility, a user must pay 5 ap per post on top of the cost of maintaining the strings themselves.

Note: this skill may manipulate only puppets, and threads themselves move at manipulation speed but lack a strength stat. This skill is also a prerequisite for many chakra thread-based jutsu and skills.

Added V7 Tag, no edits made