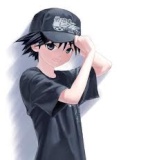 It was only recently when he had finally managed to get some answers about the demon inside of him. He only knew what he had personally learned, no one giving him any explanations about the power he was tapping into, but the beast had finally given in and allowed Raiku to have a chance to learn everything he wants to know. First came the mastering of the beast’s power, which was the most intense training that he had ever faced in his entire young life. He gained the beast’s respect without knowing it due to his determination to never give up and proving that he can handle things that push him almost beyond his limits. Clearly Raiku was indeed worthy as a host for the beast, this was something that the beast would have a hard time denying, but it still wanted its freedom and very much disliked being sealed inside of someone, no matter who it was or what they could do. The beast knew a fight was probably going to happen no matter what, but first Raiku needed to mentally be ready and prepared to continue this process, something the beast felt Raiku was too young to handle.

Raiku traveled over a couple days from Konohagakure no Sato, out into the borders of the great shinobi nations, nearby the old location of Kirigakure no Sato that was apparently sunk into the ocean water to be forever lost from the world, even Raiku knew very little about that old village and would probably never really know much about it since it no longer existed. This area however was untouched and seemed to lack any evidence of fights ever taking place in this peaceful and beautiful area, the Grand Sea. Raiku felt peace as soon as he arrived in the area, making him stop and pick the area to be the place he’d confront the beast inside of him once more.

Within the confines of his own mind, calmness washed over his mind and body. There was a distance between what he felt down, and the foulness the beast had created inside of him, taking all his anger, rage, hatred, and malicious tempting thoughts and manifesting itself in front of him as a sort of prelude to the showdown between him and the beast in his body and mind. The other side of his personality took form as a mirror image of him, but it seemed darker and evil looking as compared to his own appearance. It was strange to look at him like this, a surreal feeling nearly knocked him off his feet at how real things felt even inside his mind where it should be safe but this felt like a dangerous journey that could end up costing him his life things didn’t go great.

“You’re me?” Raiku asked the thing in front of that appeared to be a foul version of himself, hoping to get some answers about this strange situation that he was currently in at the moment before confronting the beast.

“I’m what you should be, the better part of you, the part that hates and wants to experience killing.” The voice responded, more devilishly than he would have expected, making his hair stand up and a chill go down his spine. This thing nearly terrified him, almost lacking sanity that should be there but wasn’t. Raiku was confused by the answer the thing gave him.

“What do you mean by that?” Raiku asked, never having noticed the feeling of wanting to kill or being mad enough to hate. Sure, he got upset at his team and considered some really bad things but he’d never do that, those thoughts were created by the thing inside of him, or was it? Maybe there was a part of him he didn’t know about, nor really understand.

“Your peaceful life, oblivious to the outside world living in ignorant bliss, a life not many would realize is such a beautiful and great thing. You ended up being more or less pure heart, a truly good person destined to do great things, but the world swept in and made a mess of that. Killing your parents and ruining your life like it was nothing more than some piece of trash for no reason.” The thing began to speak of terrible things, only startling Raiku more.

“I don’t understand, I don’t want to kill anyone, there’s no reason to answer death with more death. Spilling more blood won’t clean up old blood.” Raiku stopped the thing for a moment, trying to reason with it.

“True, but you’ll come to see that the cycle is like that right now. You could do something to change, to change the cycle and make it end. Perhaps some fighting would still continue, but you might be able to nearly end it at least keep it on small scale and prevent senseless killing.” The thing responded, attempting to get Raiku to see its point of view. “You can’t get what you desire until you are mentally whole and know who you are inside.”

Raiku began to understand what the thing was talking about, senseless killing did need to be stopped, but even if he was able to get the power what use is it to kill people and simply be a killer. “How does more killing answer it?” he wanted the question answered clearly.

“Some people have to die because those certain people will continue to cause death. To stop a long chain of death, you need to stop the chain maker and it ends. Make yourself impose your power on more people and the fear will make them stop doing wrong.” It continued to persuade Raiku.

“Kind of makes sense.” Raiku started thinking about it more and more, still unsure about who all he’d have to kill if he even did this. Also the thought of imposing his will on other people seemed extreme and harsh as if trying to remove free will. “People shouldn't live in fear.” He stated.

“They already do, only if you do this right, only people who want senseless killing will live in fear like they should.” The thing seemed to look more like him and less foul and evil, as if Raiku was starting to see the same point of view and was even agreeing with this other side of him.

“I guess I can see your point, innocent people won’t have to fear dying for no reason and those who do wrong would fear, guess that’d make me a hero or something.” Raiku said with a small laugh at the end, not fully realizing the kind of step a person takes when they commit and take someone else’s life, something that is not to be taken very lightly and easily can corrupt the most innocent of people. Killing can work like an addiction, but in this case no matter how intelligent and mature Raiku was for his age, he was still nothing more than a kid who could see beyond the curtains of foul intentions coming from this darker side of his mind.

“Indeed, if we work together you can gain the power you need and accomplish that goal with ease, there’s no reason for you to banish me away but instead you should accept me and together we can make the world a more peaceful and safe place.” The clone of himself seemed to be finished arguing, and although it had good intentions, the results were not guaranteed as the beast’s foul intentions of letting this happen were simply to play on the fact its host was nothing more than a talented kid.

“You’re right, sounds like a plan to me, so what do we do now?” Raiku asked, fully trusting the situation now and feeling confident about his encounter with the beast that was going to happen soon. If only he had been through more in life and understand the balance of life and death and the intoxicating feeling that death can bring to people involved in it, especially those taking the life and causing the death no matter the reason behind it.

The other side of him walked over and laid its right hand on his chest. “Now we become one and face our toughest challenge yet, together and work towards our true goal. Let’s show this beast what we’re made of.” With that said, it was just Raiku standing there with a new resolve in his eyes, he understand what he was working towards, seeming to know himself better and even feeling at peace with what happened to his parents. Unaware of the consequences, Raiku accepted a darker side of himself that even the beast didn’t know about but soon enough would know about. First thing that needed to happen was for Raiku to confront this beast to learn more about it and gain a new level of power from this encounter. There was a feeling inside of him that he’d have to actually fight the beast, and the thought made him feel excited for the challenge of fighting the beast.