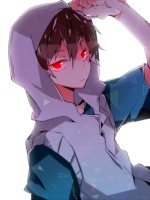 Osore stands growling slightly while he looks around for a boat...for some reason people tend to avoid this part of fire country....He briefly wonders why that is??

He sighs turning around to view his comrades as he walks along the board walk glancing around his annoyance reaching critical levels.

"Shouten!! Where are all the boats!!!??" Osore shouts to his friend while stomping his foot childishly "...And Sayomi...he's been missing for awhile now!!" He continues while glancing out to the sea the shadowy silhouette of the far off island that is Kirigakure being centered on his vision. With a sigh Shouten follows his comrade, his sunglasses blocking the unobstructed sun, the clouds but mere wisps near the ocean, his katana strapped to his left hip left to dangle softly as he walks.
He hears the question he speaks, "Not a clue, it seems with the war torn world no one is dumb enough to leave their boats sitting around."
Shouten says with a soft chuckle at the end of his words, he is however curious on the whereabouts of Sayomi and what he has been up to, several questions have been in Shouten's mind about the boys plans and schemes but for the most part Kirigakure no Sato is his main focus. 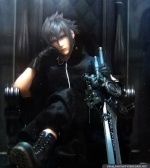 The wind blows through Sayomi's hair, the mind controlled body of the Sanbi Demon acting as his colossal mount as he surfs it to the dock where his comrades are standing.

He stands tall on the back of the beast with his hands in his pockets as the massive turtle slowly comes to a stop, waves violently splashing against the wooden dock due to the momentum of the demon. He calls down to his two friends, noticing their previous frustration at the lack of transportation. It was surprisingly coincidental that he had recently come by a new friend to remedy that problem.

Osore's eyes grow wide as his friend comes upon a beast that can serve as their transportation, he grins wide before running before and leaping and glomping the head of the beast "SAYOMI!!! YOU CAME THROUGH IN THE MOST AWESOME WAY POSSIBLE!!!!" He nuzzles the beast his arms and legs wrapped around the Sanbi's neck "Hey?? Hey??" He asks his grin widening as he glances at Sayomi. "What's it's name??"

Shouten gives no more than a few blinks to Sayomi's arrival and that of the beast, Shouten makes a movement forward leaping upon the back of the beast.
"With every sea creature there is a fisherman's tale, so how is it you got ahold of this monstrosity?" Shouten asks curiously, meanwhile his "leader" is left to cuddle the beast.

Osore seemed pleased with Sayomi's method of transportation. The man asked for the name of the beast, the last possible question the man expected that he would have to asked. His mind raked through all the possibilities for a good name.

"Oogway," Sayomi speaks out, unsure exactly of the word that he just said. Hopefully that name would suffice, and wouldn't draw too much attention to the randomness of it all.

Sayomi hears Shouten's question and thinks for a moment before answering.

"I stumbled into a fight, had a bit of an exchange with a group of ninja. Turns out that one of the casualties was the Mizukage, and the three-tails came out. He caused me a bit of trouble, but I was able to... relieve.. the mist village of ownership for this particular Bijuu."

It was even more coincidental that the murder of the leader of the village they were about to go attack was included in Sayomi's travels. This had been a lucky day for the Dark Brotherhood. He expected more questions to be asked, but for now Sayomi would give the basics so that the rest could be explained if needed while riding.

Osore begins petting 'Oogway' with a wide grin somehow shimmying to atop the creatures neck while petting the creatures head gently.

"Ohhh...Your gonna eat so many children~<3" He cooed to the beast with a wide grin before giggling slightly and lancing back to Sayomi upon mention of the Mizukage dying. "Huh...what a coincidence.." he blinks twice his eyes now trained on Shouten..how will his friend react?

Shouten hears his words but they do not register at first, he is thinking of the name that Sayomi gave the turtle.
Now the information is received and processed, Shouten's eyes grow slightly wide, a grin upon his face as the identity of this beast is now known to be more than that of a normal sea creature.
Although aggravated he did not get to kill the Mizukage with his bare hands it will make it that much more fun to torture each and every piece of trash in Kirigakure no Sato.
"Then what are we waiting for?!"
With this Shouten crouches and places his left hand upon the top of the turtles shell, his zero gravity extending to all who is on the turtle which includes the two of his allies should they remain upon the turtle.
With Shouten's actions the gravity is removed from himself, the turtle, and the two men as it begins to float, Shouten's right hand points behind him as a burst of gravity follows from his palm which acts to propel the turtle towards that of Kirigakure no Sato and higher into the air.

Sayomi smiled, the only way this method of transportation could be more ridiculous is if it became a flying turtle, and indeed it now was. Him and his friends now traveled towards Kirigakure, riding the flying, colossal Bijuu as the cold wind passed through them. His gaze rest on the horizon now, holding his hands in his pockets and readying himself for when this demon was used as a bowling ball to bash down the village gates.

Maybe now it was time to inquire on any other possible mission details.

"What is our objective? Is there anything else to this other then the Mist's destruction?"